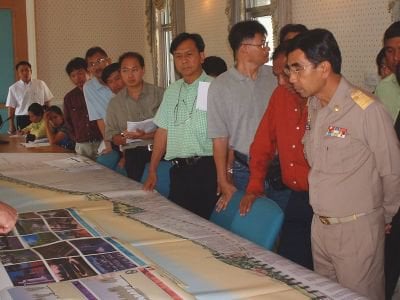 PHUKET CITY: Architects commissioned by the Tourism Authority of Thailand (TAT) yesterday presented a plan to rebuild Patong Beach, at a cost of 550 million baht, to make the popular tourist attraction safe from any future tsunami while at the same time preserving its beauty.

The plan includes growing large trees along the beachfront and creating sand dunes to impede the progress of tsunamis heading for the resort town, as well as 10 emergency assembly points along the beach where people can seek shelter within 15 minutes of being warned that a tidal wave is coming.

After Governor Udomsak questioned the team as to whether the sand dunes and plants would survive the downpours and turbulent seas of the annual monsoon seasons, the architects said the plan, which was drawn up in only one week, would be modified to account for the elements.

– one exclusively for sunbathing;

– a sports area with a playground;

– a zone from Soi Bangla to Sawasdirak Rd for restaurants and nightlife venues;

– a public park with a large pavilion for concerts and weddings;

A fifth area, the coastline along the beach road from Phra Barami Rd to Kalim Beach would be left undisturbed to preserve its natural beauty.

The plan advocated that no buildings be within 15 meters of the beach, and that all power and telephone cables be buried.

It also called for sun loungers to be banned from the beach, replaced by plastic mats for sunbathers to lay on, and for the number of beach umbrellas to limited to 1,500, compared with the estimated 7,000 that were on the beach before the tsunami.

Mayor Pian agreed with the idea of limiting the number of beach umbrellas. “This plan will return Patong Beach to its previous beautiful condition, and show the world that this is beach to visit.

“Local people will benefit from this plan, which will stimulate more tourists to visit [Patong],” he said.

If the budget is approved quickly, the project could, it is estimated, be completed by the end of this year.

“I will present this plan to Prime Minister Thaksin Shinawatra, who will visit Phuket next week, for approval and to allocate the budget,” Gov Udomsak said.