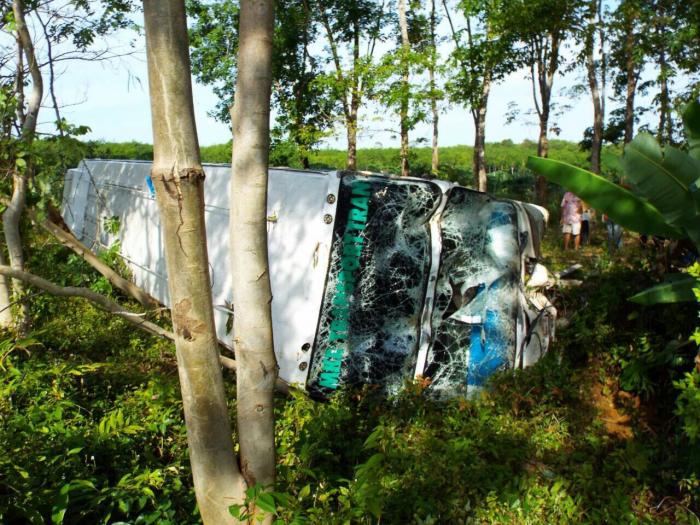 PHANG NGA: A bus driver transporting tour guide students is suspected of being high on drugs when he lost control of his vehicle, flipping it and slamming into trees on the roadside.

The bus was carrying 35 students from Far Eastern University in Chiang Rai on their way to participate in a training course for tour guides in Phuket, Phang Nga and Krabi.

The accident occurred at the Khok Kloi T-junction in Phang Nga. Twenty of the student passengers suffered minor injuries and were taken to Takua Thung Hospital.

The driver, Tanapon Prakobmit, 32, told police there was a problem with the bus’s steering wheel, making the front wheels unstable, and that the brakes failed, causing him to lose control.

“However, we found ya ice [crystal methamphetamine] paraphernalia inside the bus,” said Maj Suthipong Rodsong of the Khok Kloi Police. “We conducted urine tests on the students and the driver. Only the driver tested positive for illegal drug use.”

At this point, police have only charged Mr Tanapon with reckless driving causing injuries.

Maj Suthipong told the Phuket Gazette that further testing would have to be carried out to determine whether the drug paraphernalia found on the bus actually belonged to Mr Tanapon.