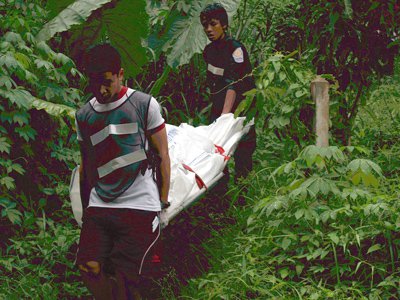 PHUKET: Police yesterday recovered the body of a Burmese rubber tapper who had been murdered in the hills overlooking the famous Patong Beach.

The upper half of his body had been set alight and his hands were tied behind his back.

Wissanu Itsang, who owns a rubber plantation near where the body was found, reported the gruesome discovery to Kathu Police at 4pm.

Responding to the call were Kathu Police Superintendent Col Arayapan Pukbuakao and Duty Officer Lt Pathapee Srichai, along with an investigation team and Kusoldharm rescue workers.

The body was found on a rubber plantation about three kilometers up the dirt track that leads from the end of Phisit Gorani Rd Soi 9 into the hills overlooking Patong.

At the scene, the officers found the body, clothed only in blue shorts, face down on the ground with a small camping gas cylinder lying nearby.

Inside the hut where the man reportedly lived, police found a blood-stained bed sheet, and at the cooking area in front of the hut was half-eaten meal on a plate and empty liquor bottles on the ground.

Lt Pathapee said that the scene of murder suggested that the man had been drinking with people he knew before he was killed.

Burmese laborers living on a nearby rubber plantation told police that they knew the man was Burmese and aged in his thirties.

Lt Pathapee said police had yet to question the plantation owner where the man worked to try to establish the identity of the victim or any other information that might lead to finding his killer.

Police are continuing their investigation and awaiting the results of an autopsy to determine the exact cause of death.