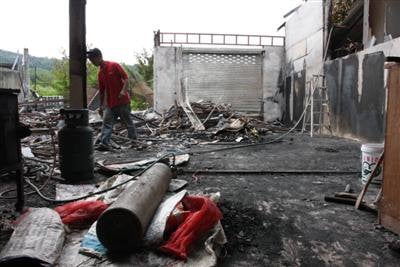 WICHIT, PHUKET : The owners of a furniture shop on Chao Fa West Road have vowed to remain in business, despite a fire that reduced half the store to ashes and caused an estimated 1 million baht in damages.

The blaze broke out at the Touch Wood Furniture & Thai Advanced Solar Power Co Ltd store on Chao Fa West Road, opposite Kajonkietsuksa School, on the night of June 28 .

Phuket City Police received an emergency call around 9pm and immediately dispatched five fire engines to battle the blaze, four from Wichit Municipality and one from Phuket City.

Firemen took 30 minutes to control the flames. There were no injuries, but over 100 furniture items were destroyed.

Touch Wood Furniture owner Prissana A-Mano told the Gazette there were no customers inside when the fire broke out, at around 8pm.

Two staff had been inside preparing dinner, but left shortly after to buy some more food. The fire was reported by neighbors who noticed the smoke, she said.

Over 100 items of furniture on the ground floor were destroyed, including many that had already been paid for by customers.

“We lost over 200,000 baht in customer furniture orders in the store. Some items were irreplaceable antiques,” she said.

Customers whose furniture was destroyed will be reimbursed for money already paid, she said.

The cause of the fire has yet to be determined, but it is known that it started in the rear and spread quickly. Two offices on the second floor at the rear of the building were also damaged.

Remarkably, the front of the store was unaffected.

The store will remain open, but the rear has been declared off-limits to customers, Mrs Prissana said.

Thanayu Parnnapong, a building contractor hired to conduct the clean-up operation, speculated that a short circuit and old wiring could have caused the fire.

The affected area covers about 60 square meters. Concrete and steel supports in that area were so badly weakened by the intense heat that they will need to be replaced, he said.

Phuket City Police Duty Officer Anek Mongkol said an investigation into the cause is underway.

“We still have to interview Burmese staff and speak to the owner again. Police forensics and fire department investigators have already visited the site and will release their findings soon,” he said.