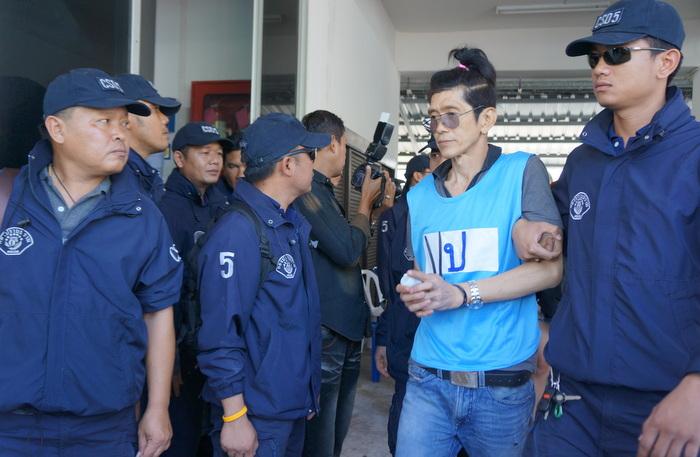 CIB officers were informed that those living in the home may be involved in an influential drug network on the island, confirmed CIB Commander Maj Gen Chatchai Eamsang. Officers from the Crime Suppression Division (CSD) 5 were called in for backup.

“When we arrived, two men were caught trying to escape. After questioning them, we learned that there were other people in the house with loaded firearms and drugs,” said CSD 5 Superintendent Phumin Poompanmoung.

“We attempted to negotiate with the suspects – which included Jompol Siriwan, the ex-mayor’s brother-in-law – and informed them that we had a search warrant. However, they locked themselves in the house.”

Family members of the suspects were brought to the scene to persuade them to surrender peacefully.

“Two additional suspects surrendered after hours of negotiating. However, Mr Jompol, who was previously jailed for ten years on attempted murder charges, remained in the home, armed and ready to fight,” Col Phumin said.

Special weapons attack teams (SWAT) were eventually able to safely enter the home and apprehend Mr Jompol, who was found hiding in the ceiling rafters.

Mr Suratin, who arrived at the scene, assured police that he was not involved with any of the activities on the property.

“My wife and I lived here for more than twenty years. However, we moved to a new house about three years ago. Later, my brother-in-law moved into a small area at the back of the property, ” Mr Suratin said.

“Whatever happened with Mr Jompol has nothing to do with me. If there is enough evidence to arrest him, I have nothing to say. I trust the police to do their job.”

Meanwhile, the CIB will continue their raids on the island as part of their ‘Prai Fah Na Sai’ (Peace for the People) campaign, which had already netted 58 people including 28 jet-ski operators (story here).

“This is just the beginning,” said Gen Chatchai. “We will continue our investigations into other targets, as well as follow leads from those already apprehended.”

Gen Chatchai also noted that their initial intent was not to garner the help of the CSD or SWAT team.

“We originally only sent nine officers to the house. I apologize to the people of Phuket for any inconvenience that this raid may have caused. However, our job is to help rid the island of criminal activities,” he said.

The five men were charged with illegal possession of firearms and gang possession of Category 1 drugs with intent to sell. The drugs in their possession included ya ice (crystal methamphetamine), heroin and ecstacy.