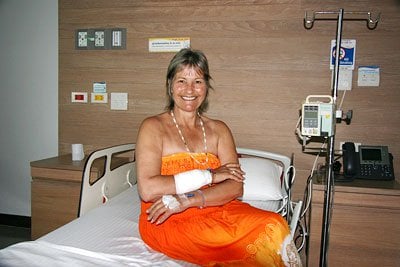 PHUKET: A British woman with a life-long fear of monkeys was seriously injured by several primates while visiting Monkey Beach on Phi Phi Don Island on May 21.

Dee Darwell, 56, arrived in Phuket on May 18 and had a couple of “lovely” days before setting off on a one-day trip to Phi Phi Don and surrounding islands with Siam Seacanoe tour company.

One stop on the tour was Monkey Beach, named for its large population of crab-eating macaques.

Ms Darwell’s father kept an ‘evil’ chimpanzee that fostered her ‘intense dislike for
monkeys’, she explained.

Despite this, she agreed to take the boat trip with her friend.

Arriving at Monkey Island at around noon, Ms Darwell considered staying on the boat while the other 35 tourists enjoyed up-close encounters with the monkeys.

But rather than endure the sun, she opted to lay down her towel on a rock near the shoreline.

“I thought I was heading for safety under this rock in the shade, only to cool down. I laid the towel down and there were no monkeys in sight,” said Ms Darwell.

“The next thing I noticed, this monkey walked up next to me and I thought, ‘Oh dear,’ and I began to stand up to move away.

“Then, the monkey took my wrist and pounced on my right arm, sinking his teeth in and hung off it. He wouldn’t let go; he was locked on. I was absolutely petrified. I was shaking from head to foot and I froze,” she said.

“There was one man, a tourist, and when he saw the monkey bite me, he screamed and ran off…Then another, bigger monkey bit my arm, just next to the other one biting me, and all of a sudden I was surrounded by monkeys.”

Three or four of the creatures began attacking her from all sides, grabbing her arms, legs and rear end, leaving bruises all over her body.

Ms Darwell does not remember how she was rescued, but was later told that the boat crew had gotten the monkeys away from her.

The next thing she remembers was the blood “pumping out of a deep, deep hole” near her right wrist. “It was like it was all going in slow motion and I was watching a movie,” she said.

The boat crew were well prepared and very efficient in treating her wound, cleaning it and covering it with a bandage.

However, the treatment ended there, according to Ms Darwell; she was not immediately taken back to Phuket for further medical attention.

“I didn’t want to make a fuss in front of everyone on the tour, but for sure they should have ferried me straight back to the hospital,” she said.

Instead of taking her back to Phuket, the tour continued as scheduled with a stop for lunch, where she had to pay for a beach chair and couldn’t eat because of the pain and her “dazed” state. She said she was only given paracetamol for the “intense” pain.

“I thought, ‘I’ve paid to come on this trip, I’ve been bitten by a monkey, been brought here for a lunch I couldn’t eat and I’ve just come here to rest and now I have to pay extra for a place to rest,'” she recalled.

Yongyut Buasod, the Siam Seacanoe guide responsible for Ms Darwell’s tour, said that they did warn her of the dangers of bacterial infection and offered to take her to a hospital, but a friend with her said that she could take her herself.

Ms Darwell said that after arriving back in Phuket around 5pm or 6pm, she went to Patong Hospital.

Sensing a worsening infection, she went to Bangkok Hospital Phuket on May 28, where she underwent a surgical procedure to remove rotten flesh.

Ms Darwell said that her main complaint was with the lack of warning given on the potential dangers on the trip.

“I wouldn’t have got off that bloody boat if the tour guide would have said at all that there was any danger, any risk, even the slightest risk. I would not have gotten off that boat,” she said.

Mr Yongyut said, “We bring tourists to this beach every day, and we always warn them about the monkeys. But, in a group of about 40 tourists, you’re always going to have someone who doesn’t listen.

“We can’t control the monkeys if they decide to bite someone; that’s why we always warn the tourists. That day some people were teasing the monkeys. They don’t necessarily attack the specific person teasing them.

“Every tour company bringing tourists here warns their customers. We, also, don’t want to have problems like this. The tourists don’t have to get off the boat if they don’t want to,” he said.

She ended by saying, “Come to Thailand because it’s the most beautiful place and the people are lovely – just keep away from the monkeys.”