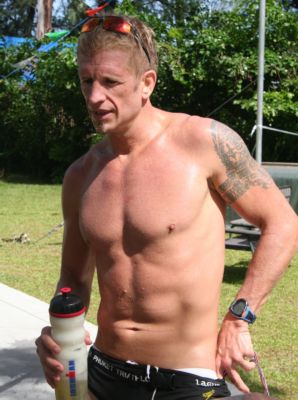 NAI YANG: After the weather closed in on the Indigo Pearl resort yesterday, it was thought the swim leg of the third TriBallistic race in the current series would be canceled, but the seas calmed sufficiently to allow the senior race to start with the scheduled 600-meter, open-water swim.

The athletes had to fight hard through large waves. Briton Bryan Hoare, winner of Race 2, led from the start and completed the swim leg in nine minutes.

The 20km bike route took in some of the local villages and also the main highway, where the athletes encountered some strong headwinds.

The 5km run, however, proved to be the toughest leg as the sun came out and heated up the course, making climbing the small hills a strenuous challenge.

What would have normally been a battle to the finish between Hoare and Nick Dobyn ended when Dobyn pulled up with a muscle injury at the start of the run.

The race was a close-fought battle throughout. After the 50m swim, Lilli Daefler sprinted out to jump on her bike with the rest of the field in hot pursuit.

The 1.5km cycle proved to be the decider as the top three jostled for position through the 750m run and onto the finish. Oranuch Sudern took top honors in the girl’s race, followed by Daefler in second place.

The junior race was another close battle throughout, with positions changing continuously over the 200m swim, 6km bike and 1.5km run. Victoria Bird successfully defended her under-10s title to make it three for three, while Christopher Thompson inadvertently ran an extra 1.5km after missing the turnaround on the run back and still won his age group.

Another victim of the tough course was junior athlete Lea Devoine, who fell off her bike and injured her leg.

There were many new faces at Race 3, with local Thai children taking part along with kids from the Head Start School.

The next race will be on October 11, once again at Indigo Pearl.