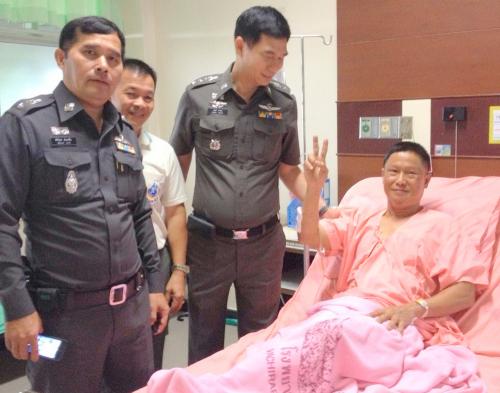 PHUKET: Phuket football fans are rejoicing a solid 2-0 victory by FC Phuket over Rayong this evening. The win virtually assures the team’s promotion to Division I of the Thai League next year.

Both goals were scored by Ivory Coast import Diarra Ali.

The first came on a penalty kick half way though the first half.

The insurance goal came half-way though the second half, after Ali split Rayong’s three-man back line to score from 20 yards out.

Phuket dominated play throughout, much to the delight of some 3,000 fans who turned up for the 4pm fixture at Surakul Stadium.

Attendance was lower than hoped for, probably due to the tremendous success of the Street Show Festival in Phuket Town as well as the Phuket Carnival now in full swing in Patong.

Although not a mathematical certainty, tonight’s win means FC Phuket only needs a draw against FC Samut Prakan next weekend to assure their passage to Division I.

The match is a home fixture, scheduled for 4pm on Christmas Day (December 25).

A member of the green-clad FC Phuket Fan Club told the Gazette after the match that she was sure “Santa Claus is coming to town” on Christmas Day.

Woman bites off husband’s penis, then stabs him to death