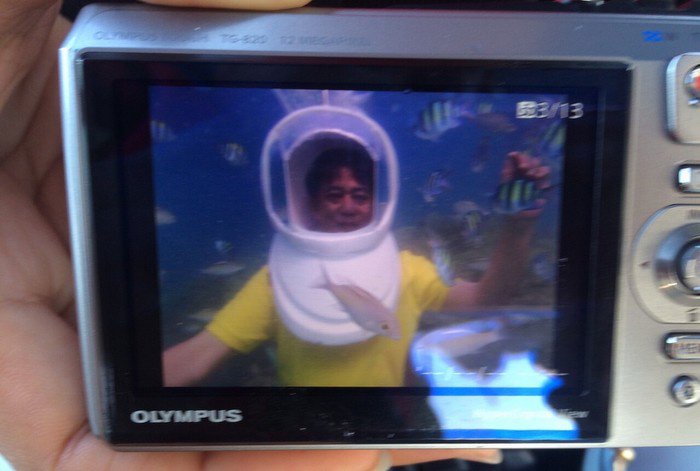 PHUKET: Despite specialists’ worries, the director of the Ministry of Tourism and Sports (MOTS) Phuket office explained that feeding fish bread in small quantities is no cause for concern.

“Officers from the Phuket Marine Biological Center [PMBC] say that feeding fish will change their natural habits. However, based on my experience, I do not think that it is wrong to feed fish bread crumbs at that depth [5 meters],” said Santi Pawai, director of the MOTS Phuket office. “I’m looking at this from my tourism point of view, and it isn’t too harmful to the fish.”

Mr Santi took part in feeding the fish while participating in a seawalker tour with Nonthasak Marine at Koh Hei (Coral Island) on Tuesday to investigate claims that tourists were damaging corals.

“I did not see any tourists stepping on corals and the [seawalker] trail was on the sand, not the coral reef,” Mr Santi said. “Each customer was allowed to have one handful of bread crumbs to feed the fish when they went underwater.”

Despite Mr Santi’s lack of concern about feeding the sea life in small quantities, environmental scientist Dr Wayne Phillips of Mahidol University explained that such practices could have dire consequences for coral reefs.

“Feeding fish is not ecologically benign. Although the mass of fish swimming in front of your mask as you feed them is very exciting and visually stunning, it has a number of negative consequences,” Dr Phillips told the Phuket Gazette in September.

“Each organism on the reef has a specific role to play. If you remove that organism or [modify] the role it plays – you upset the dynamic balance of the reef. This balance is maintained by the complex interactions within and between the different species on the reef.”

Fish feeding on bread, such as sergeant-majors, are typically grazers that eat algae. However, when presented with an easy, readily available alternative food source, they change their normal foraging behaviors to exploit the new situation.

“This means that if the fish consume the offered bread or rice, they will not consume the algae. Corals grow relatively slowly [depending on the species] and can become overgrown by the faster growing algae. Reef areas that experience heavy tourism are also likely to experience increased nutrient concentrations, which allow the algae to flourish,” said Dr Phillips.

“In normal situations, the fish will keep this enhanced algal growth in check, allowing the corals to grow and not become overgrown by algae. But if the fish are too sated on bread or rice, they will not consume the algae, the algae will overgrow the corals and the reef will change from a coral-dominated to an algae-dominated reef. Such reefs function differently from coral-dominated reefs and support fewer species. They are also generally less attractive.”

Despite approving of feeding the fish, Mr Santi explained that he wanted to see Phuket tourism grow in a sustainable way that did not damage the environment.

“Giving a lot of bread to fish at the surface is not acceptable. I will call on snorkelling tour operators to cease such practices,” he said. “We will also meet with relevant officers to see what needs to be done to prevent overfeeding fish.”

While on Koh Hei, Mr Santi also tried out parasailing, and confirmed that it was not dangerous.