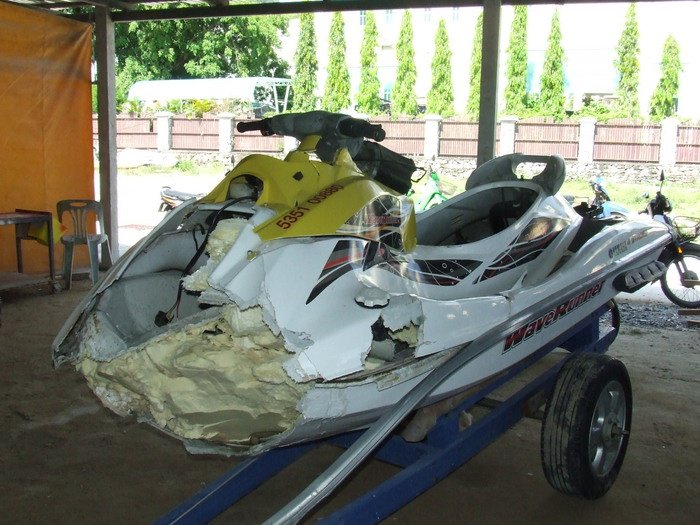 PHUKET: A staggering 75% of all respondents – including tourists – have voted that jet-skis have no place anywhere on any Phuket beach.

The poll, run for four weeks on the Phuket Gazette website, received 6,362 votes, with nearly 3,000 tourists making their voices heard concerning the simple question: “Should jet-ski operators be allowed to operate on Phuket’s beaches?”

Only 5% of the tourists who took part in the poll voted, “Yes, they provide an activity that many tourists enjoy.” A further 18% called for better regulation.

Like the tourists, the majority of Thai nationals and local expats called for an outright ban on all jet-skis in Phuket, with 73% and 76% of votes cast respectively by the groups.

The results, however, should not come as a surprise to long-term residents of Phuket, as jet-ski operators have repeatedly been allowed to stay in business for more than 20 years, despite multiple incidents of physical violence against tourists, deaths and serious injuries.

In 2004, Gazette readers correctly predicted that jet-ski operators would remain on the island despite an order by the then Phuket governor to phase out all jet-skis within seven years. That order came after two foreigners died in an accident (story here).

Another poll was called in 2009 after Australian diplomats complained to the prime minister about Phuket’s notorious jet-ski scam, in which rental operators, week after week, threatened tourists – and in the famous case of Winnai “JJ” Naiman, at gunpoint (story here) – to pay extortionate sums of money for spurious damages to jet-skis.

That poll also saw a majority call for an immediate ban on all jet-skis, with a further 20% calling for them to be phased out of business (story here).

As recently as 2012, Gen Pansiri Prapawat, deputy commander of the Royal Thai Police, failed to implement a bold “Safety Zone” plan for Patong to rope in the jet-skis to stop them from hitting swimmers. “I know the problems with…jet-ski operators cannot be solved over night. But I do believe we will have the results we want within three months,” he said on July 4 of that year (story here).

Czech busker on Bangla reunited with his family