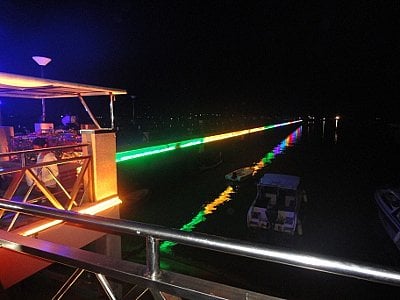 PHUKET: A 15-year-old boy was stabbed in the back last night while sitting with friends on Chalong Pier, a main departure point for tourists and divers heading out to the islands and reefs off Phuket.

One of the security guards at the scene told the Phuket Gazette that the incident happened at about midnight.

“Taweechai [Jansamud] probably had a fight with one of the people in the group he was sitting with. He made it to the 7-Eleven shop at the pier by the time we found out about it.

“We searched the area but the group he was with had already disappeared,” he said.

The emergency-response team stationed at the Tourist Rescue Center, which is located near the pier, rushed Taweechai to Mission Hospital.

The Gazette has learned from staff at the hospital that he is in safe condition.

“He has some stitches in his back and he is still here under observation,” the staffer said.

Another guard told the Gazette that it was difficult to keep an eye out for troublemakers at the pier.

“People always come here to relax at night, drinking and playing guitars in groups, as it is quite pleasant with a fresh breeze,” he said.

However, he added that fights among youths were common at the popular tourist venue, despite guards contracted by the Phuket Provincial Administration Organization (OrBorJor) patrolling the area.

“We keep an eye out for them, but there is little we can do to stop them coming to a public area,” he said.