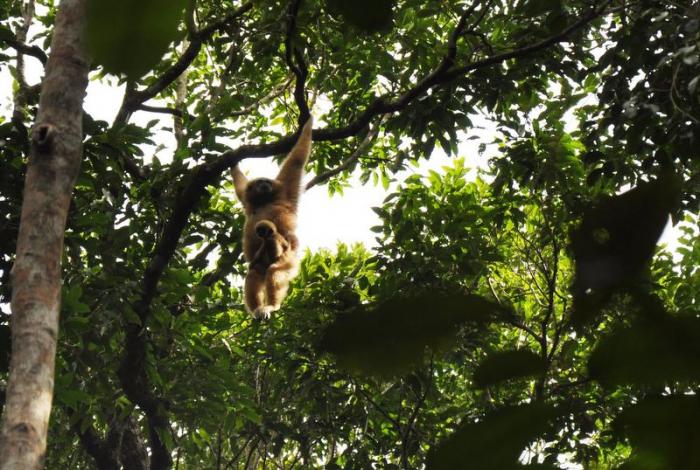 “We released three gibbon couples into the wild several years ago but hadn’t seen them around for almost two years, so we were worried about them and wondered if they were okay or not. “We discovered them last week and were all very happy to see that they were doing well,” Mr Thanaphat said.

“We didn’t attach any tracking devices to the animals – we let them live freely and naturally.”

Last week, two WARF teams split up to look for the couples in the Khao Phra Thaew no-hunting area.
“Fortunately, we found all three couples. One of the mothers was ‘Namthip’, who was born in our project and whose father was rescued from a tout offering photos for tourists in Phuket,” said Mr Thanapat.

“We’ve been wondering about her for more than a year. The next thing we know she has had a baby.”

Mr Thanaphat said that the WARF has records of 17 gibbons born in Phuket’s wilderness.

“We’re proud that we are a worldwide model for successful species rehabilitation,” he said. “Their numbers were sparse in Phuket just a few years ago, but now they’re breeding again and their population is growing. We’re glad to see them back on the island after being hunted for tourism activities.”

“As a celebrity, I can use my voice and platform to spread awareness concerning the matter, and ask people not to take pictures with gibbons if they see them,” Ms Glebova said.

The Russian-Canadian beauty queen’s comments come after a firestorm of criticism about her posting a picture on social media application Instagram of herself holding a gibbon on Phi Phi Island (story here).