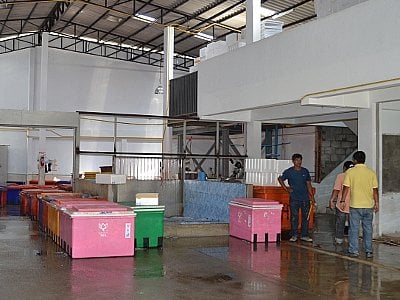 PHUKET: Following complaints from a neighboring hotel, the management of a seafood packaging plant in Phuket Town has been given three months to get the stink out.

Among those present were representatives from the Phuket Provincial Industry Office (PPIO), Phuket City Municipality and Phuket Public Health Office.

The inspection was prompted by an official complaint filed by Silver Hotel managing director Monluck Tantipornsawat.

Mr Monluck lodged the complaint with the Damrongtham Center at Phuket Provincial Hall, which serves as the provincial ombudsman’s office.

Guests and staff at the hotel have suffered from the stench of fish emanating from the factory for three years, he said.

“The smell is very strong in the morning, especially from 8am to 9am. Our guests cannot stand the smell while they are having breakfast in our ground-floor dining room,” said Mr Monluck.

“I have asked the company to do something about the smell for three years, but nothing has been done. It is the first time in my life that I have had to complain to the government like this,” he said.

V/Gov Somkiat said the Phuket Provincial Office wants both the hotel and the seafood plant to coexist peacefully.

Phuket City Municipality engineers will provide technical advice in order to help the factory reduce the odor in the short-term, he said.

“However, we have decided that within three months the seafood company has to register with the PPIO as a Type 2 factory, which requires them to redesign and install control systems to eliminate foul smells, noise pollution and other wastes and pollutants,” he said.

Government officers will work with the factory engineers to help them come into compliance with the law, he added.

The PPIO Chief also advised the firm to improve its product delivery process, he said.

“The company has to make sure that no liquids leak onto the road from their containers and delivery trucks. Otherwise, the smell will be everywhere on the road, not just inside the factory. They have to upgrade the entire handling process,” he said.

“They have accepted advice from the relevant authorities. Once the factory is registered as a Type 2 factory and has made the necessary changes, its operations will comply with the law,” he added.

Officials will inspect the facility in three months to ensure that the required changes have been made, he said.

“We have been operating this as a family business for over 20 years. We receive fresh seafood from local fishermen and package it in plastic bags and boxes for delivery to hotels all around Phuket.

“However, with the continual growth of the business, the PPIO officers have advised us that it is now time for the company to register as a factory, according to the law,” Mr Anan explained.

“We will try our best to improve the factory within three months, as we have been instructed,” he said.