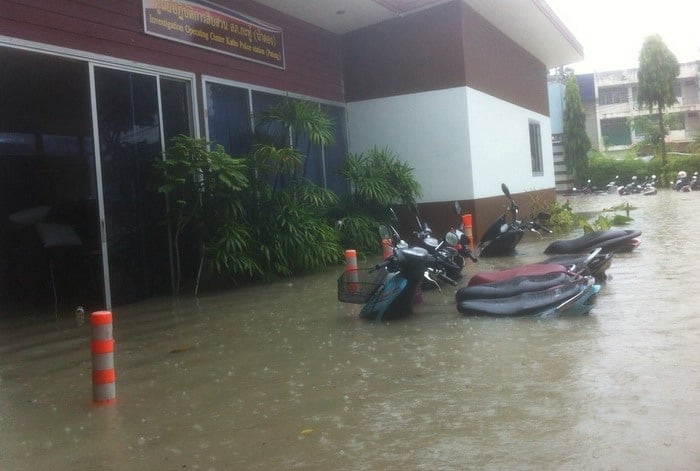 PHUKET: A 420-million-baht budget has been approved by the Public Works Department to help alleviate flooding in Patong.

“Four flood-protection methods will be put into place from 2016 through 2018,” Patong Mayor Chalermluck Kebsub told the Phuket Gazette.

The department is now working with municipality officials on surveying, planning and designing the new systems that include a retaining wall, man-made ponds, shortcut drains and a sluice gate.

The retaining wall is to be built along the Pak Bang Canal, which was given a 19-million-baht budget just two years ago by the Phuket Provincial Administration to install a sluice gate (story here). However, plans fell through when no one bid on the project.

This time around, things seem to be looking up with tentative plans to revive the idea.

“We will finally be able to build a sluice gate at the Pak Bang Canal,” Ms Chalermluck said.

“It is the main canal that drains water to the sea. When it’s high tide and rains heavily, the water from the canal cannot flow. This sluice gate will block the sea water from coming into the canal when it is high tide, while there will be a pump to push the rainwater out.”

Ms Chalermluck also noted that five ponds will be dug along roads connecting the Bang Wad, Wang Kee On and Bang Turian canals in order to collect scraps of wood, soil and rubbish that would normally clog drainage pipes.

“The third project is in the north of Patong municipality where there is a canal named Bang Ton Khao. Now, the excess water from this canal flows to 200 Pi Road, which was built a long time ago with a small drain,” Ms Chalermluck said. “This drain is too small to handle the amount of water that comes from the canal.”

A new shortcut drain will be built on Prabaramee Road to in order to drain water from the Bang Ton Khao Canal directly to the sea.

“Engineers confirmed that once all the systems are completed, Patong will no longer flood because there would be many shortcuts to drain the water and ponds to collect trash that normally slows or blocks drainage.”

One of the many reasons that Patong is flood ridden is the construction of roads and buildings in areas that block waterways.

“Normally, a building must be 3 to 6 meters away from a canal, but, as we have seen, very few follow the rules,” she said.

In addition, the excavation of mountains around Patong is a main source of excess water reaching the already low area.

“The excavation of mountains is like making wounds on them. When water comes down, there is no surface to absorb the water or slow it down,” Ms Chalermluck said. “We are attempting to find those who are excavating without a permit to stop them, and for those who hold an excavation permit, we will ask for their cooperation in order to protect against landslides.”