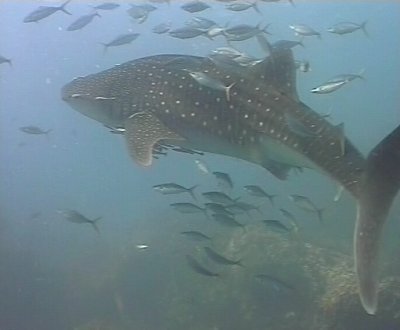 “Big Boy has been spotted off Koh Surin nearly daily since the beginning of last month,” she said.

“He is about eight meters long and weighs more than a ton. Whale sharks average about five meters in length, but can grow to as large as 12 meters,” K. Pakdee explained.

She recommended that tourists and divers alike take the opportunity to see this prime example of the world’s largest fish. “Whale sharks live in oceans with water temperatures between 21°C and 26°C, and Big Boy migrates from Alaska every year to escape the cold temperatures there,” she said.

“Now is the best time of the year to see him. He is rarely spotted here after April,” she added.

K. Pakdee said that another, smaller whale shark has been spotted in the same areas. “It is five meters long and has been nicknamed ‘Son of Big Boy’ by local divers,” she said.

Dive companies frequently complain that whale shark sightings have become increasingly rare due to the activities of fishing boats in the Andaman Sea.