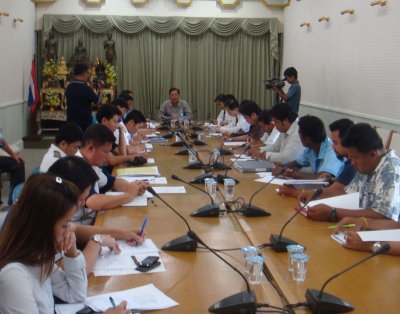 PHUKET CITY: Insurance companies have 15 days to submit bids for a contract to insure every jet-ski on Phuket, it was announced at the latest ‘jet-ski summit’ at Phuket Provincial Hall today.

By November 8 – thirty days after the bid deadline – every operator in Phuket will have to apply for insurance or stop doing business.

For our previous report on the jet-ski summit click here.

This afternoon’s meeting was chaired by chief of the Army’s Internal Security Operations Command in Phuket Rear Admiral Amornchot Sujirat.

Representatives from 10 insurance companies and roughly the same number of jet-ski operators spent the meeting sharing information on the jet-ski business.

The insurance companies will go away, crunch the numbers, and those interested will submit bids for the contract.

It was also agreed that each jet-ski company would have to use the same jet-ski rental contract, a measure also due to come into effect by November 8.

Jet-ski workers will have to wear a uniform and carry an ID card. Alien workers will be forbidden from working in the industry.

The number of jet-skis will also be restricted to 219, Rear Admiral Amornchot said.

Phuket corruption cases to be fought on home turf