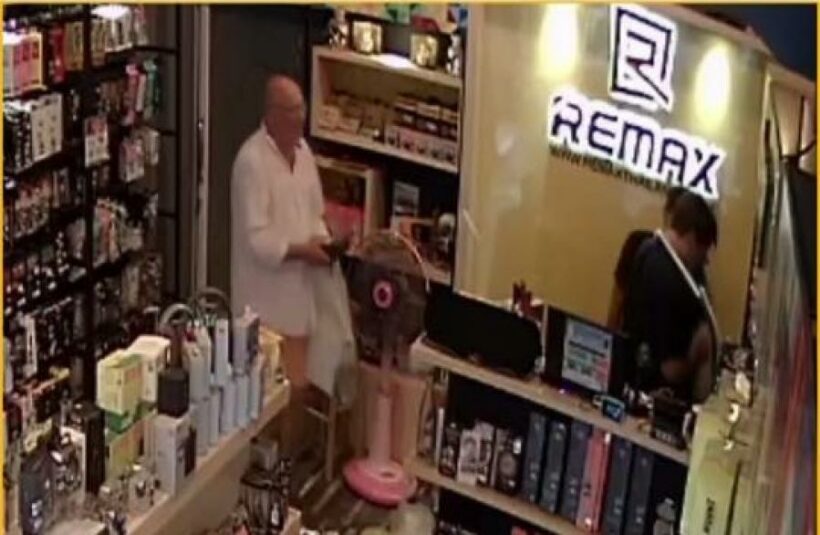 PHUKET: Police are hunting for two foreigners who allegedly stole mobile phone accessories from an electronics store in Phuket on Friday.

A Facebook user named Maii-Ly Chaiviriyawong (whose real name is Nichapa-orn Chaiviriyarong and is the owner of the shop) shared pictures and CCTV footage of the incident on social media.

Ms Nichapa-orn owns a shop named ‘Remax’ in Samkong. According to her statement, the men entered her shop at about 3:14pm and purchased products worth 5,000 baht.

They paid for their purchases using a credit card, but continued to browse the store. One of them then went in the back and allegedly swiped a phone holder worth 699 baht. Ms Nichapa-orn told police that he looked to be between 50 to 60 years old.

The owner said she was not in the shop when the incident occurred, but was able to access and monitor the CCTV footage from another location. She called one of her staff members to follow the men, but they had already disappeared by then.

“We checked the credit card information and found that it was Belgian. We took whatever information we had to file a complaint with the tourist police,” said Ms Nichapa-orn.

Phuket Tourist Police Chief Naruewat Puttawiro registered the store owner’s complaint and said his team would do their best to apprehend the suspects.