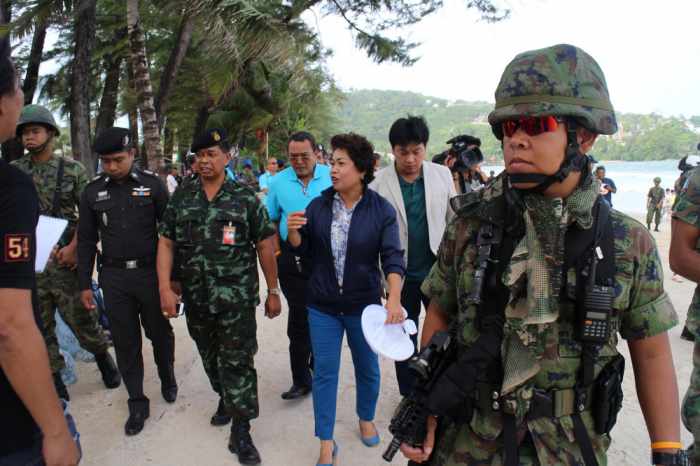 PHUKET: Military leaders have launched a beach overhaul project with an August 14 deadline by which all remaining illegal structures must be removed from beaches in Phuket and five other Andaman-coast provinces.

Owners who disobey will be fined and face encroachment charges.

“We are following an official order handed down from the National Council for Peace and Order [NCPO]. We followed up on the beach clearing progress on August 1 and found that multiple establishments had ignored our order,” said Col Somchai Ponatong of the Army’s 41st Military Circle.

“Three businesses on Tri Trang Beach and one on Kalim Beach have yet to pull down their illegal structures. If they do not do so by August 14, military personnel will do it for them.”

Military officials confirmed that three of the businesses that had yet to remove the offending structures included White Box, Tri Trang Restaurant and Windsurf Shop and Restaurant.

A team of military personnel and local officials led by Vice Governor Chamroen Tipayapongtada first stormed Tri Trang Beach on July 29 and ordered many buildings, including Tri Trang Restaurant and Windsurf Restaurant to be torn down within days (story here).

White Box was also ordered to remove half of the restaurant – the 10-by-12-meter terrace and the second floor – during an inspection on July 29 (story here).

“We have given the beach businesses the chance to take down their structures on their own,” he said.

“But if the illegal structures are still in place after the deadline, the owners will face land encroachment charges and will have to pay 300 baht per military personnel per day to remove the structures.”

Lt Gen Walit Rojanapakd, Commander of the Royal Thai Army Region 4, will land in Phuket by mid-August to evaluate the condition of the beaches, confirmed Col Somchai.

The August 14 D-day was announced during meeting on Wednesday between the Royal Thai Navy Regions 3 and 4, the Siam Intelligence Unit, the National Economic and Social Development Board and local officials from each of the six Andaman provinces.

“The purpose of the meeting was to discuss ways to improve tourist-popular beach provinces along the Andaman coast: in Phuket, Phang Nga, Krabi, Ranong, Trang and Satun,” said Vice Admiral Tharathorn Khajitsuwan of the Third Naval Area Command.

“We addressed the most important issues these provinces face, including land encroachment, illegal taxis, harmful fishing practices and the preservation of endangered marine animals.

Officials at the meeting detailed each of the issues and laid out plan of attack, said V/Adm Tharathorn.

“The two biggest problems we are in the middle of tackling are land encroachment and illegal taxis. We are working on getting all taxi drivers legally registered, as well as moving forward with land investigations and encroachment cases,” he said.

“We are concerned about men who sit on the beach to fish rather than going out on boats, as we think this practice is bothersome to tourists,” he said.

“Meanwhile, in Trang, we are monitoring the quickly disappearing dugong. Those in Trang province are among the last left in Thailand, and there are not many.”

The International Union for Conservation of Nature’s Red List of Threatened Species, the world’s most comprehensive inventory of the global conservation status of biological species, lists the dugong as a “species vulnerable to extinction” (story here).

Prachuap Mokharat of the Marine and Coastal Conservation Centre in Trang, told the Gazette today that an initiative had been underway to replant seagrass in areas inhabited by dugong and an awareness campaign had been launched to inform fisherman of the threatened species and what they could do to help preserve the marine mammals.

Although conservation is still a serious issue, Mr Prachuap told the Gazette, “I was surprised, but happy, to find out that the number of dugong in Koh Libong has increased to 135 from between 110 and 115 last year.”

Any residents in the Andaman-coast provinces are urged to report any problems they see with the beach overhaul project to the Royal Thai Navy Region 3 base at cape Panwa, in Phuket, at 076-391598.

Teenagers among five dead in horror day on Phuket’s roads