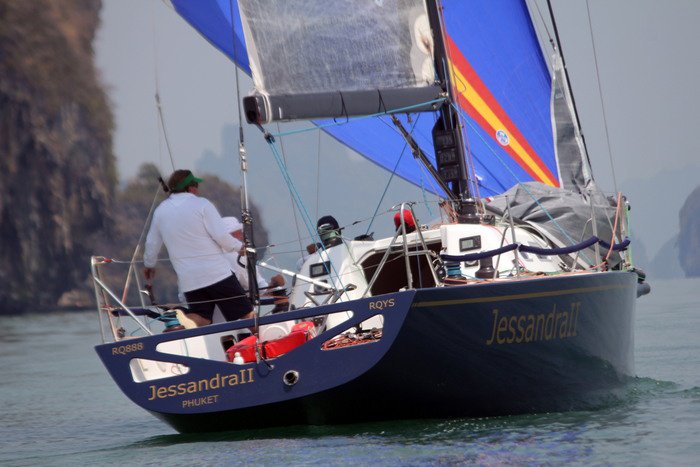 PHUKET: The 18th Bay Regatta set sail on the morning of March 5, after an opening night party and buffet the evening before at the Chandara Resort & Spa at Ao Po.

Consisting of a series of passage races, the yachts were divided into 4 classes: Racing, Cruising A, Cruising B and Multihulls.

The first course was 17 miles long. It began off Koh Naka Yai, with participants sailing north leaving Koh Phanak and Koh Na Ka Ya to port before rounding the first mark, northeast of Koh Yai, to starboard and then heading toward Koh Yao Noi, leaving Hin Mot Daeng to port and Koh Batang to starboard before finishing off of Koh Kudu Yai.

After starting the racing and multihull classes in light wind, Race Officer Simon James raised the “Follow Me” flag and headed north to the top of Phang Nga Bay to look for wind for the cruising classes.

After three hours in falling winds, the racing and multihull classes courses were finished south of Koh Phanak with Fergus Wilmer and Jennifer Wilmer’s Foo 4 finishing first in the racing class, followed by Jessandra II and Tiburon. The multihulls saw Andrew DeBruin’s Bullet in first place, followed by Java and Galeforce.

At about 1pm, the wind finally arrived for the cruising classes, who started a re-designed course across the bay to Koh Yao Yai.

All yachts then headed to Paradise Koh Yao for a presentation evening under the stars, hoping for better winds for day two.

On the second day, light winds again delayed sailing and the race committee was unable to get a race in for the cruising classes, but they were able to get in a shortened course for the racing and multihull classes from the southern tip of Koh Pang, leaving Koh Hong to starboard finishing between the committee boats and Koh Nang.

The racing class was won by Roland Dane’s Jessandra II with First in second place and Foo 4 claiming third.

In the multihull class Merve Owens’ Adreneline again claimed line honors with John Coffin’s Java taking first place on handicap followed by Bullet and Hurricane. Yachts then headed for the PP Erawan Palms Resort at Laem Tong, on the north coast of Phi Phi Don, for the second night’s party.

For the third day of racing, the wind gods came out to play, allowing the “Phi Phi Islands Race” to take place.

The fleet set off from a start east of Laem Tong. They headed out rounding Koh Mai Pai (Bamboo Island) and Koh Yung (Mosquito Island) to port then passing Hin Klang to port as well on through a gate, leaving the committee boat Seraph to starboard before heading down past Laem Hin at the southern tip of Phi Phi Don rounding Koh Bida Nai and Koh Bida Nok to starboard and heading back toward Seraph at the finish line, leaving Phi Phi Le to port.

The evening’s party was staged by Arayaburi and Bay View Resort.

The racing class was won by Jessandra 11 for the second straight day with Foo 4 second and First in third place.

In the multihull class, Adrenaline again claimed line honors, but once handicaps were applied, Java took first for the second day in a row. Second spot went to Alan Carwadine’s Asia Catamarans Hurricane with Bullet in third.

After over five-and-a-half hours on the water, the three final boats in this class (Jeff Hook’s Sailom, Dominic Buchholz’s Venus Hunter and Russell Waddy’s Allsail Uhuru) crossed the finish within a minute of each other.

The final day of racing, saw competitors head back to Chalong from Phi Phi, where upon finishing the regatta participants celebrated with a big bash and the final awards ceremony at the 02 Beach Club in Chalong.

Good wind allowed Race Officer James to get in one of the famous spinnakers runs that the Bay Regatta is renowned for as the competitors sailed from the start line off Phi Phi Don to Ao Chalong.

Interestingly, committee boat Rendezvous acted as both the start boat, and then racing ahead, as the finish boat with the other committee boat Seraph acting as the gate off of Koh Mai Ton and eventually the finish line for the Cruising B class.

Adrenaline was first across the line on the final day with a time of 02:25:29, narrowly beating Hurricane, Twin Sharks and Blue Noze in a closely-grouped finish.

On the final day of racing in cruising A, Phoenix (03:55:30) finished almost an hour ahead of second place Windstar. The only two other boats to finish on the final day in this class were Libby Boyd and the Chinese students from the Krabi Sailing School on Mas Alegre and Venus Hunter.

Venus Hunter won the “persistence award” on the final day. Drifting backwards, dangerously close to the reef on Koh Mai Ton, on the opposite side of the white buoy forming the gate with committee boat Seraph, they continued to drift and drift, only to finally right themselves and then sail back around the buoy, cross the finish line properly and grab 4th place in Cruising A with a time of 06:14:41. Linda, also in cruising A, was caught drifting backwards parallel to Venus Hunter for a while, but the captain in his Scottish brogue declared that he would fight another day and withdrew from the race leaving Venus Hunter to fight her way back solo.

This year’s racing class was won by Roland Dane’s Jessandra 11 with a total of 5 points; second went to Fergus Wilmer and Jennifer Wilmer’s Foo 4 with 8 points; third to Evegeni Nikforov’s First with 13 points; while Mick Tilden’s Fujin was fourth with 16 points and Nicolay Vlasov’s Tiburon was last with 18 points.

The multihull class saw John Coffin’s Java take first overall with eight points. Second spot went to Alan Carwadine’s Asia Catamarans Hurricane, who, although they tied with Andrew DeBruin’s Bullet with 12 points, took second spot because of higher placings in their races. Andrew was sailing with his son Fin and Scott Duncanson.

In Bay Regatta history, no one captain, or boat, has won its class more often than Niels Degen-Kohlw’s Phoenix and they did it again, capturing Cruising A with 4 points; Sansiri’s Windstar was next with five; Mas Alegre was third with ten; Venus Hunter was fourth with 14; Linda fifth with 17 and Allsail Uhuru and Sailom finished tied for sixth with identical records at 20 points each.

Cruising B class saw the Gillows on Poco sweep all three of their races taking first place overall. The regatta’s “courage award” went to Kevin Gillow, who after suffering a stroke last year, made a remarkable comeback to win this class with just his charming daughter Mia as the only other crew member.