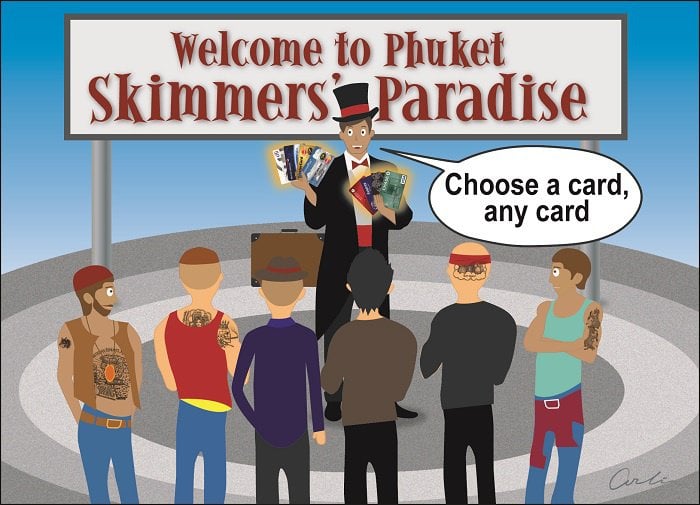 PHUKET: Despite efforts nationwide to upgrade automatic teller machine (ATM) card technology to make it more secure, the arrests of three groups of international ATM-card skimmers in Phuket in a week demonstrates that ATM fraud is rampant on the island.

ATM users – which includes just about everyone with a bank account – should continue to exercise a great deal of caution when conducting transactions to ensure that they do not fall prey to these high-tech, low-life embezzlers, who appear to have established a hub for their nefarious activities right here in Phuket.

The recent arrests started with the apprehension of five French nationals operating in Chalong and Kamala on February 28 (story here), followed by the arrest six days later in Krabi of two more Frenchmen found in possession of hundreds of cloned ATM cards (story here), all said to have been purchased from a foreigner in Phuket.

Believing that both groups involved in the arrests were part of a wider network, police continue to investigate in order to track down the ringleaders, suspected to be based in Patong.

Meanwhile, at the time of going to press, Phuket Provincial Police were also hunting down Russian national Vladimir Orlov (story here), the alleged mastermind of another ATM-card skimming operation run out of his shop in Kata. Thanks to surveillance and cooperation by security personnel at the affected bank, three of his alleged accomplices were taken into police custody at the premises on March 5.

These arrests, as well as the evidence collected thereupon, seems to indicate that all phases of the ATM skimming process are taking place on the island, from stealing digital information to using it to clone cards and conduct illegal transactions.

Thailand and Indonesia have been identified by the non-profit group European ATM Security Team as the two countries with the greatest risk of ATM skimming. It is particularly rife in mass tourism destinations such as Phuket and Bali, where so many people come and go, and many tourists still use old-fashioned magnetic strip ATM cards. Once a user’s personal identification number (PIN) is obtained, either by covert camera surveillance or simply by peeking over the shoulder of an unsuspecting ATM user, it is only a matter of time before his or her accounts are emptied.

Fortunately, a few simple and easy precautions can go a long way in protecting cardholders from having their hard-earned assets plundered. These include such easy steps as regularly changing one’s PIN and covering the keypad when entering the number.

ATM skimming is just one part of an increasingly complex and ever-changing world of digital crime that reflects the head-spinning pace of technological change that can easily overwhelm even the most tech-savvy among us. With so much out there, it becomes necessary to decide which technologies to focus on – and which to avoid.