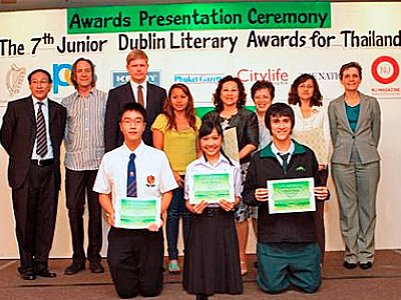 PHUKET: Sirada Chatikavanij, a 17-year-old student from Triam Udom Suksa school in Bangkok has won the Junior Dublin Literary Award for Thailand in a contest that saw close to 1,000 English-language essays submitted.

As the Grand Prize winner, Khun Sirada received a check for 50,000 baht.

The award was announced at a presentation ceremony in Bangkok last night, attended by students from throughout Thailand, including Phuket finalist Popthum Lawtongkum from the British International School, who had won the Southern Regional contest.

Also on hand for the event were the winners of each of the other regional contests, that is the North, Northeast and Central, Khun Sirada having won the latter. The students, who came from both Thai and international schools, were joined at the ceremony by parents, teachers, the national Award judges and a number of well known adult writers and authors.

The keynote speaker was Jo Cummings, author of the Lonely Planet guidebook for Thailand.

In choosing the national winner, as well as the winners of each of the regional contests, the panel of judges took into account such criteria as imagination, technical quality of English, vocabulary, adherence to theme and word count, and “wow factor”.

“Again, the quality of the essays was excellent and there were creative twists in many of them,” said Pana Janviroj, president of The Nation.

The annual Junior Dublin Literary Awards for Thailand are supported by the Embassy of Ireland, Property Care Services (Thailand) and the Kerry Group. The contest is organised by The Nation, the Phuket Gazette and CityLife Chiang Mai.