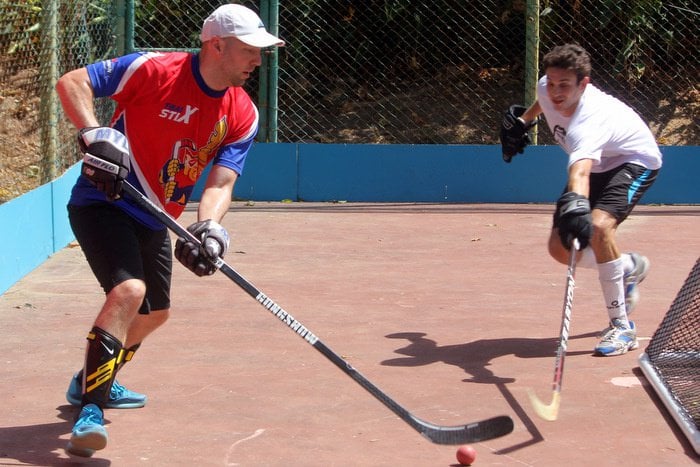 PHUKET: Phuket’s first foray into the annual Mekong Cup ball hockey tournament, held in Karon last Saturday, ended with an ousting in the round-robin stage, but the competition for Southeast Asia’s most coveted ball hockey trophy has been hailed a success.

Though this was the fourth straight year that the Mekong Cup was staged at the Centara Karon Resort Phuket, it was the first time a team from Phuket entered the competition.

The local team – the Phuket Pucks – was organized by Joe Burgess of Nok and Joe’s Bar/Restaurant in Surin, where he holds ball hockey matches every weekend. The team even featured a former draft choice of the San Jose Sharks, Dominik Bielke, who was drafted in the seventh round in 2009.

However, the Pucks (0-4-1) made a hasty exit, finishing sixth overall. Joining them were the Chiang Mai Highlanders (0-3-2), who secured fifth place.

The first semi-final saw a battle of the two Bangkok teams with the top-seeded Thai Stix (5-0-0) beating the fourth-seeded Bullies Resurrected (1-2-2) 6-1.

The other semi-final saw the second-seeded Singapore Chili Crabs (3-1-1) come back from a two-goal deficit to beat the third-seeded Hong Kong Islanders 3-2 (3-2).

That set up a final between the Thai Stix and the Chili Crabs. Singapore jumped out to an early 1-0 lead, but the Thai Stix stormed back with three unanswered goals.

Singapore scored a late goal to close the gap, but when the final whistle sounded, the Thai Stix had triumphed and were back on the top of the Asian ball hockey world, laying to rest the ghosts of recent past – especially last year’s heartbreaking last-minute championship loss to the Hong Kong Islanders.

Thai Stix forward, and the youngest player on the team, Aku Korkonen, was the tournament MVP, as he scored 10 goals.

This was the fifth solo championship for the Thai Stix, but their first since 2004. Captain John Stevens and goalie Yves Gaboriault are the only surviving members from that team still on the Stix today, though Phuket team-member Scott Murray, as well as referee and former tourney organizer John Casella were also part of that dynasty, which won four titles over five years.

The Stix are now tied with the Hong Kong Islanders for the most Mekong Cup championships with five each.

Yves Gaboriault was praised for an outstanding job in his first year as tourney organizer. Praise was also given to referees Craig Noon and John Casella for a great job of maintaining order, as there weren’t any serious incidents throughout.

The Centara Karon Resort Phuket also received accolades as host, and put on a lavish and sumptuous buffet for the awards banquet, where a charity auction raised 40,000 baht for the Vivian Slot scholarship fund (click here).

Attending the event and playing for the Phuket team was Roman Torok, the ISBHF Senior Vice-President & Vice-President of the Slovak Ball Hockey Union.

For more information about ball hockey every weekend in Surin, email Joe Burgess of Nok and Joe’s Bar/Restaurant at atchara1986@hotmail.com