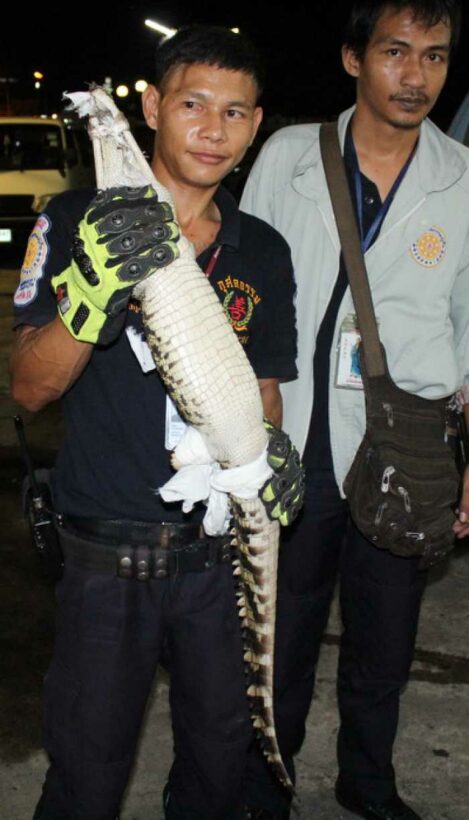 PHUKET: A Phuket resident was given a fright when he discovered a meter-long baby crocodile riling his dog in his garden last night.

Kusoldharm Foundation rescue workers were called to Soi Hatchananiwetate, behind the Phuket Provincial Administration Organization (OrBorJor) Hospital, at 7:30pm to deal with the troublesome reptile.

“A resident there told us his dog wouldn’t stop barking. When he went to investigate he was shocked to find the baby crocodile about to attack his pet,” Kusoldharm Foundation rescue worker Watchara Srikacha told the Phuket Gazette.

Rescue workers searched the area for more crocodiles to make sure the baby reptile’s mother was not hiding nearby.

“We are concerned that the mother might have laid her eggs in a nest in the mangrove swamp behind the house,” said Mr Watchara.

“If she is still in the area it could be very dangerous for local residents.”

The Kusoldharm Foundation will hand over the baby croc to the Phuket Fisheries Office.

“We will continue to search the area to make sure no other crocs are hiding close to residential properties,” Mr Watchara said.