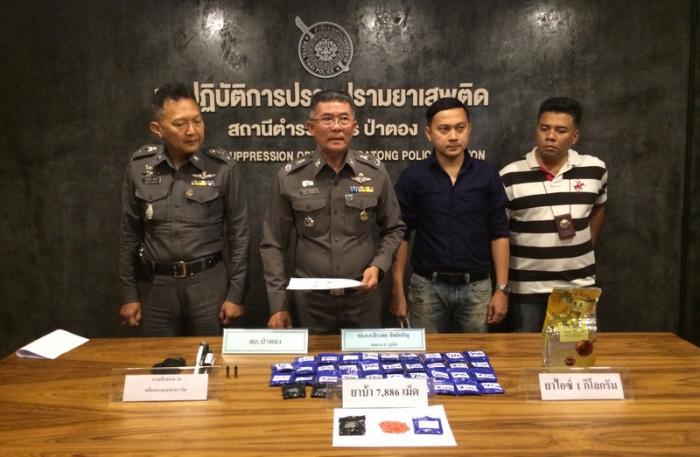 PHUKET: Two suspects from a major drug network were arrested yesterday with a kilo of ya ice (crystal methamphetamine) and nearly 8,000 pills of ya bah (methamphetamine) worth about 5 million baht.

“We got a report from one of our sources about a big drug delivery from Bangkok to Phuket,” said Phuket Provincial Police Commander Teeraphol Thipjaroen.

“Our source informed us that Mr Sompan would be the one making the delivery. We tracked his movements and learned that he would arrive in Phuket by bus, so our team waited for him at the terminal,” he added.

At about 9:30am, officers saw Mr Sompan getting off the bus with a box. They approached him, searched his belongings and found the stash.

He was charged with possession of a category 1 drug with intent to sell, then taken to Patong Police Station for further questioning.

“Mr Sompan admitted that the drugs belonged to him and that he intended to sell them to teenagers in Patong. He also provided information about another dealer from the network, which led to the arrest of Uraiporn Boonsawang,” said Maj Gen Teeraphol.

Ms Uraiporn was found in possession of a .38 gun.

Mr Sompan did not provide the name of his contact in Bangkok, but Phuket police are coordinating with officials there to take further action.