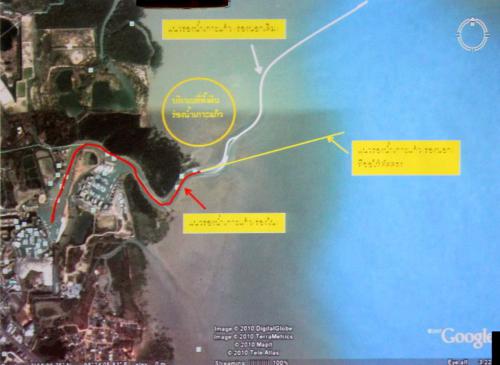 PHUKET: A 12-million-baht project to dredge the Koh Kaew Canal and deepen the existing approach channel from Phang Nga Bay will begin in March.

The six-month project was approved at a public hearing led by Governor Maitri Inthusut at the Royal Phuket Marina last Thursday.

“Our officers found that the canal is not deep enough for big boats or yachts and could cause problems when they travel to Boat Lagoon, Royal Phuket Marina or the village fishing pier,” said Somkiet Kheawyoi, the Director of the Marine Department’s Development and Maintenance Regional Office.

Two options for the Koh Kaew Canal project were put to the vote.

The first option was to dredge the existing 1.6km canal and the existing 3.6km approach channel from the bay to two meters deep at low tide.

“The villagers voted for the first option,” confirmed Mr Somkiet.

Governor Maitri explained that the government was willing to spend the money on dredging the canal serving the two private marinas – Boat Lagoon and Royal Phuket Marina – in order to improve marine infrastructure.

“Doing so will make Phuket more attractive for people organizing MICE [Meeting, Incentive, Convention and Exhibition] events and also for yacht owners who contribute to marine tourism,” he said.