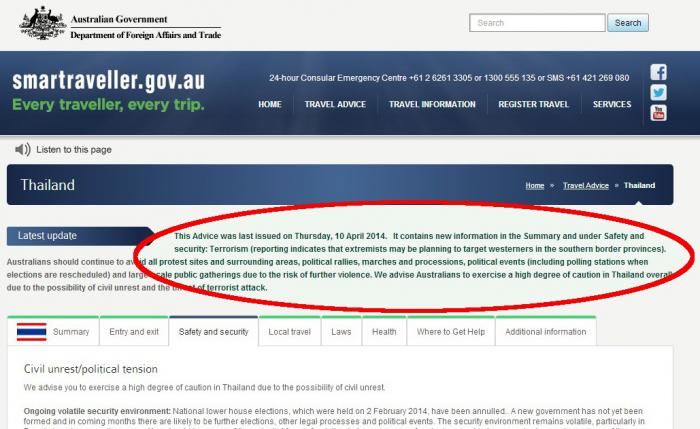 PHUKET: The Australian Government’s Department of Foreign Affairs & Trade has upgraded its travel advisory, warning travellers that extremists in the Deep South provinces of Yala, Pattani and Narathiwat may be targeting westerners.

“We strongly advise you not to travel at this time to the southern provinces of Yala, Pattani, Narathiwat and Songkhla, or overland to and from the Malaysian border through these provinces due to high levels of ongoing violence in these regions,” reads the upgraded security notice.

This includes travel by train between Thailand and Malaysia.

The advisory reports that in recent years almost daily attacks have taken place in these areas, many of which have caused deaths and serious injuries.

“Bombings and shootings are commonplace in these areas. Arson and beheadings have occurred. The Thai Government has warned tourists not to travel to these areas,” reads the report.

“Reporting indicates that extremists may be planning to target westerners in the southern border provinces.

“Australians in Yala, Pattani, Narathiwat and Songkhla provinces may be caught up in violence or terrorist attacks directed at others. If you are in these provinces, you should consider leaving. If you decide to stay in the southern provinces, you should ensure you have the appropriate personal security measures in place.”

Since January 2004, insurgency-related attacks have claimed more than 5,200 lives, with many more injured, including foreigners.

“An Australian was one of seven people injured in a bomb blast in Yala province in May 2007,” the Australian Government warned.

The heightened travel advisory follows a series of co-ordinated bomb attacks in Yala last weekend. On Sunday evening, four almost simultaneous explosions rocked Yala, killing one person and injuring 28 others in the heart of the town (story here).

The Phuket Gazette has yet to confirm whether the travel advisories of any other foreign countries will be upgraded in line with the latest warning from the Australians.

The new generation of F1