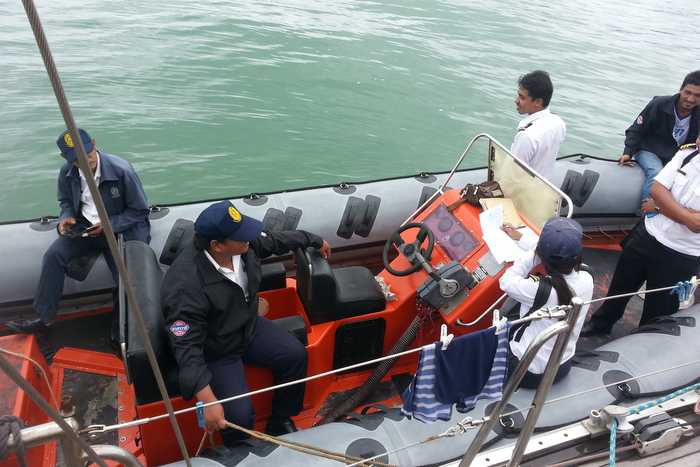 PHUKET: A 10,000 baht fine lodged against an Australian-owned yacht was dropped after officials confirmed that the vessel was registered with the Phuket Marine Office.

Over the weekend, four Australian yachties claimed that a group of six uniformed Thai marine officers had shown up on a dinghy and had attempted to extort money from them while at sea in Phang Nga Bay.

The Thai officers and Australians had a 45-minute-long broken conversation about the charges before the officers wrote up the official fine and left without money, explained Phang Nga Marine Office Chief Wimonman Suwannarat to the Phuket Gazette today.

“The officials that handed down the fine that day are my staff,” Ms Wimonman said.

“I ordered them to drop the case after we found out that the Australian yacht was registered in Phuket.”

Ms Wimonman denied reports that her officers had called the Australians multiple times after the fact, asking for the payment.

Ms Wimonman also denied that the fine had been imposed because the Australian vessel was not flying a Thai flag while in Thai waters.

“The 10,000 baht fine was charged because the marine officers inspecting the yacht believed that there was no Thai captain or engineer on board. They were not aware that the vessel had already been registered with the Phuket Marine Office,” she explained.

“The fine had nothing to do with the lack of a Thai flag.”

Both Ms Wimonman and Phuket Marine Office Chief Phuriphat Theerakulpisut confirmed that there is no fine for not flying a Thai flag on a foreign vessel.

“Of course, it is good manners to fly the flag of the country you are passing through. However, you will not be fined for not doing so,” said Mr Phuriphat.

Moreover, Ms Wimonman confirmed that internationally-registered vessels are not required to have Thai captains.

“Captains on these vessels have international licences, therefore a Thai captain is not required,” she said.

Ms Wimonman told the Gazette she believes this incident can serve as a lesson for better communication among marine officials.

“Good communication skills and making sure that everyone is up-to-date and properly informed are all important issues that need to be raised in Phang Nga and Phuket – and even in other nearby provinces,” Ms Wimonman said.

“The same AIS regulations for Phuket will also take effect in Phang Nga and Krabi. I hope that this system will help make our jobs easier, and help us to identify all boats entering and exiting our waters,” she said.

“We must find a way to manage this system so it will benefit everyone.”