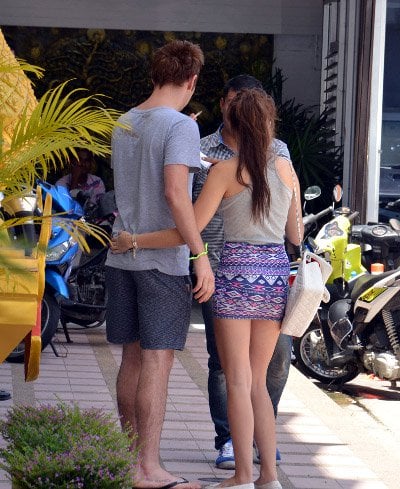 PHUKET: Phuket Provincial Court today sentenced a 21-year-old Australian woman to 15 days in jail for falsely reporting that she was raped in Patong on Sunday.

In her report to Patong Police, 21-year-old Stevie Rochelle Bamford claimed she was attacked by three men while taking a tuk-tuk back to her hotel at about 2am.

However, CCTV footage taken at the end of Soi Bangla shows the woman leaving the area on a motorbike taxi at about 3am on Sunday.

“The Australian confessed to the police last night that she had lied about being raped,” said Patong Police Superintendent Sermphan Sirikong.

While the motive behind the false report remains unclear, it appears to involve a dispute between Ms Bamford and her boyfriend.

“She and her boyfriend had an argument that night,” Col Sermphan said.

The motorbike driver who took Ms Bamford to her room was questioned by Patong Police.

He explained that he escorted her to her room so she could get money to pay him. While she got the money, he noticed that broken items were scattered around the room.

As the time this story was posted online, Ms Bamford was still at Phuket Court, where she was receiving assistance from the Australian honorary consul to Phuket Larry Cunningham.

It is not known whether or not she requested bail, but Phuket Immigration Police were already preparing documents to arrange for her deportation from Thailand.