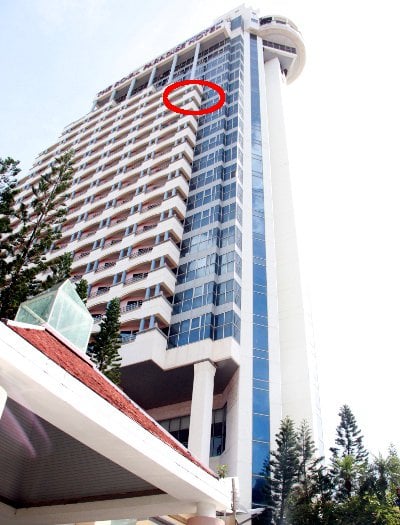 John Hurley, 39, suffered broken ribs, a punctured lung, serious injuries to his right leg and a broken left hand in the fall.

His leg was nearly torn off in the impact and he suffered deep bruises to his body, a Kusoldtham Foundation rescue worker told the Phuket Gazette at the scene.

“He landed on the clear plexiglass roof on the second floor and then hit the extended cement terrace of that floor,” the rescue worker said.

“It took about 10 minutes to get him to Patong Hospital,” he added.

Staff at Patong Hospital confirmed to the Gazette that Mr Hurley has since regained consciousness and was transferred to the Vachira Phuket Hospital this afternoon.

Capt Teerasak Boonsang of the Patong Police said they were now questioning witnesses known to have seen or spoken with Mr Hurley before his fall.

Mr Hurley was staying at the Royal Paradise Hotel & Spa, which dominates the Patong skyline.

“We found a chair on the balcony of his hotel room and on the chair was one of Mr Hurley’s shoes,” explained Patong Police Deputy Superintendent Kittipong Klaikaew.

Rescue workers at the scene said they could smell alcohol on Mr Hurley.

Lt Col Kittipong said that Mr Hurley was due to check out of the hotel today.