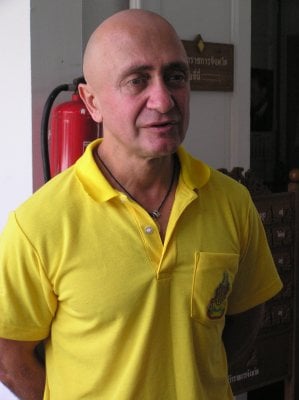 Mr Kerylidis explained that the idea originated from Capt Bob Pagett who, he said, has been operating helicopter tours in Queensland, Australia, “flying stars around” for the past seven years, and now wants to move his operation to Phuket.

“Phuket is fast becoming one of the most popular tourism destinations in Asia,” Mr Kerylidis said.

“The Governor is positive and has said many good things [about the idea],” he said. “With his approval and his direction, we are hoping to start this business within the next three or four months.”

“There is nothing more important than the blessing and the direction of the Governor because these are his people, and he knows the island. If he gives his support then we know we are moving in the right direction and that this will be good for the island,” he added.

Mr Kerylidis said the company is looking at bringing two new Bell helicopters, each costing about 30 million baht and having a capacity of seven to eight passengers each.

However, he explained that the business is still in its early stages. “We are looking at 150 million baht to start this business. We’re looking at investors in Australia, though a Thai investor would be more than welcome on board,” he said.

He added that the company was examining several places to use as a base, two in Patong, another in Kathu, and Phuket International Airport.

The helicopters will be available for emergency rescue if needed, Mr Kerylidis said.

If the Governor approves the tour service, the company’s next step will be to register with the Department of Civil Aviation and apply for an air tour operator’s license from the Air Transportation Office.

Gov Udomsak said, “This service will raise Phuket’s profile and add another aspect to Phuket’s tourism, especially for rich tourists.”

However, he added, “Mr Kerylidis has shown me the business plan. He must find investors first. So first he must find the capital, and then get the licenses, so it will proceed step-by-step.”

“He needs my approval, which I have yet to give [officially],” he said. “I have to read the business plan in greater detail first.”