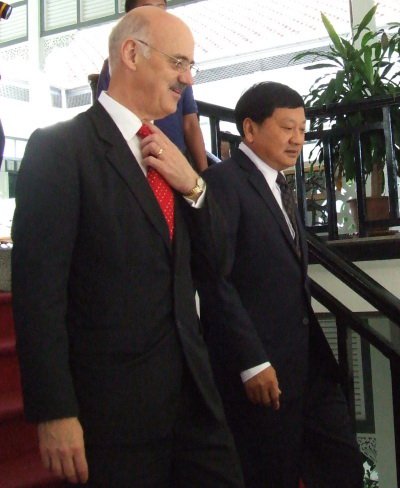 PHUKET: The new Australian ambassador to Thailand yesterday named the safety of Australian tourists as his mission’s top priority in Phuket.

In Phuket to meet the governor yesterday, Ambassador James Wise said, “The problem that we worry about most of all in Phuket – and anywhere else in the world – is to be very assured that Australians are as safe and secure as can be.

“Also, when they do find themselves in trouble, we hope that they will get the same treatment as local people,” he added.

“The governor is very frank about the problems with taxis, jet-skis and tuk-tuks. He is very focused on those problems and he wants to fix them – that we appreciate very much,” Ambassador Wise said.

“If we receive any feedback from Australians visiting Phuket, we will pass that on to him as he would like to hear those stories also. Then he can address the problems as soon as possible,” said the ambassador.