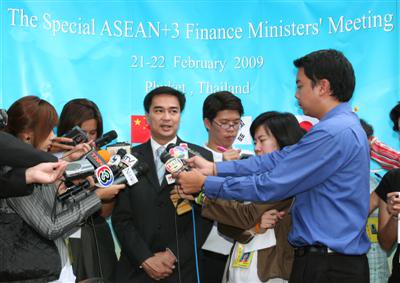 CHERNG TALAY, PHUKET: East Asian finance ministers will finalize the upgrading of the region’s bilateral currency-swap arrangement into a US$120 billion multilateral facility at their next meeting in May.

“In order to ensure regional market stability and to foster confidence in the markets, we stress the importance of ‘operationalizing’ the multilateralization of the Chiang Mai Initiative,” Finance Minister Korn Chatikavanij said at the close of a special ‘Asean plus Three’ Finance Ministers’ Meeting held at the Shearton Grande Laguna Resort over the weekend.

The move is aimed at deepening cooperation among the 10 Asean member countries, along with the regional economic powerhouses of China, Japan and South Korea.

Finance ministers from the 13 countries agreed to expand their currency pool from US$80 billion to US$120 billion. The agreement will become effective after Asean governments give official endorsements.

Asean will contribute 20% of the proposed US$120-billion facility, while China, Japan and Korea will be responsible for the remainder, said Mr Korn, who chaired the meeting. The ministers will finalize key elements of the agreement at their next meeting in May in Bali.

In the first phase, the fund will be coupled with the International Monetary Fund (IMF). When a country asks for help due to capital flight during a financial crisis, 80% of the financial aid will be tied to the IMF’s reform prescription, while only 20% will not be subject to the stringent conditions.

An independent regional surveillance unit will also be established to begin objective economic monitoring. When the surveillance system becomes fully effective, the regional fund would be de-linked from the IMF, he said.

Sheraton Grande Laguna Director of Marketing and Communications Ashleigh Brayshaw said the event went off without a hitch.

“It was great to have such a high profile event in Phuket and within Laguna. The feedback we got from the ministers of the delegations on how well organized it was, was very positive. They achieved what they set out to do, and from the hotel’s perspective we got fantastic feedback and are really pleased at how it went,” said Miss Brayshaw.