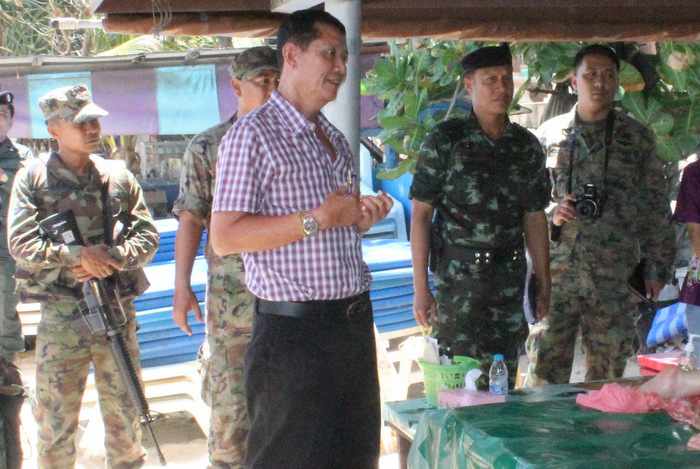 PHUKET: Armed soldiers were present yesterday as eviction notices ordering all businesses to vacate Karon Beach by Saturday were delivered.

Karon Mayor Tawee Thongcham walked the length of the beach to issue the notices to each vendor operating on the sand.

He was joined by Maj Gen Paween Pongisirin of Region 8 Police, soldiers from the 41st Military Circle and personnel from the Royal Thai Navy Third Area Command, which is based in Phuket.

“While officers in other areas have been clearing up beach encroachment, Kata-Karon Municipality had yet to get anything done. That is why I had to come to the beach today,” said Gen Paween.

“I have ordered Mayor Tawee to ensure all businesses are removed from the beach. Otherwise he and his officers will face another charge of abusing their positions of power.”

Mr Tawee is currently serving his role as Karon Mayor while out on bail on charges of conspiring with an organized crime organization, namely a Kata-Karon taxi mafia cartel (stories here and here).

He served the eviction notices yesterday while police and officials from the national Anti-Money Laundering Office (AMLO) raided his office at the Kata-Karon Municipality building, just meters away (story here).

“All illegal structures on the beach must go. The beach belongs to everyone. Nobody owns it; we must clear it so locals and tourists have the chance to enjoy the real natural surroundings,” Gen Paween said.

“The problem has continued for too long. We have no intention to pick on any local people. They know it is illegal. It is time to stop.”

No arrests for encroaching on public land were made and no structures were torn down or seized yesterday – and no explanation was given as to how the businesses were allowed to set up along Karon Beach.

However, in a crackdown on illegal vendors in 2011, Mayor Tawee admitted that at least 20 such businesses are registered and paying Kata-Karon Municipality for the right to sell wares and provide services on the sand.

“The system worked well in the past when only local people were involved and everyone followed the rules,” Karon Mayor Tawee told the Phuket Gazette in a previous report (story here).

Despite some operators being granted official rights to vend on the beach, high-ranking Phuket officials over the years have led repeated attempts by police and other law-enforcement agencies to remove illegal operators from encroaching on the sand (stories here, here and here).