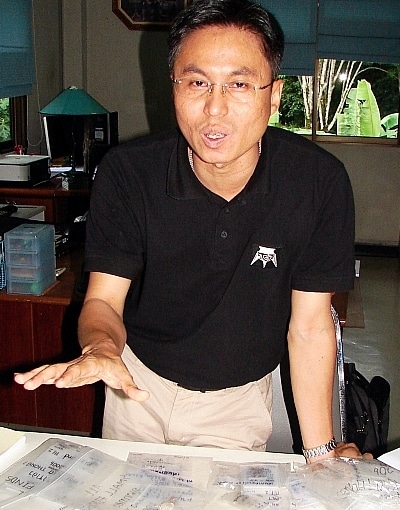 PHUKET: An inquiry into the whereabouts of ancient beads, ceramic vases and glass shards excavated by a Phuket archaeological team in 2005 has revealed that the artifacts are safe on the island.

The relics are all estimated to be more than 2,000 years old.

A letter of complaint was filed with the Crime Suppression Division by Sutha Pratheep Na Thalang on March 14.

The letter, submitted on the behalf of the “people of Phuket”, claimed that the beads were not put on display at Thalang National Museum, as required by Thai law.

Reports made by Thai TV Channel 3 called the archaeologists who found the beads into question, but Capt Boonyarit Chaisuwan of the 15th Regional Office of Fine Arts – and a member of the excavation team who found the beads – announced yesterday that the beads were still on Phuket.

The beads were put on display for a short period in March this year, but were then removed from public viewing so further research and study could be conducted on them.

“Every step of the way, my exploration has had many witnesses including my staff, villagers and media. They were all allowed to monitor the excavations,” Capt Boonyarit said.

The first excavation was in Ranong in 2005 and a second site was discovered in a different Ranong district in 2010.

More than 1,000 samples were collected, including etched beads, rouletted ware, crystal stones and stone instruments used to make the beads.

Capt Boonyarit explained that the beads were not kept on permanent display at the museum for safety reasons as well as research.

“Thalang National Museum is not the safest place to display these precious national artifacts and I need to conduct more in-depth study on them,” he explained.

Mr Sutha said he was satisfied with the explanation and that it was good to know the beads were still safe in Phuket and not sold on the black market.