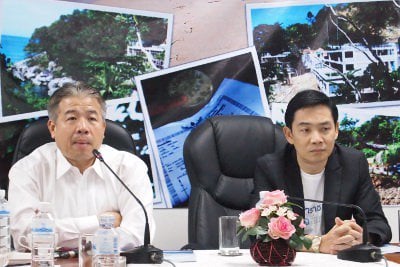 PHUKET: A probe into the issuance of land title deeds in Phuket has uncovered widespread encroachment into protected forest areas and identified government officials as playing the key role in facilitating the theft of state property.

Public Sector Anti-Corruption Commission secretary-general Pol Col Dusadee Arayawuth, in Phuket as part of the investigation, yesterday told the press his office had identified “hundreds of rai” of land valued at billions of baht that fell into private hands through collusion with government officials.

Joining Col Dusadee in his Phuket investigation was Chote Trachu, permanent secretary of the Ministry of Natural Resources and Environment.

Among the land plots identified were two parcels totaling 15 rai in the Nakalay area in Kamala, just north of the Patong border. Both plots had been issued Chanote titles upgraded from SorKor 1 papers, which are issued by the government to confirm a holder’s claim of having occupied the land.

However, after inspection the Chanote titles were found to have been issued based on SorKor 1 representing a different or smaller plot. The method of deceit is commonly known by Thais as the “Flying SorKor 1” ruse, explained Col Dusadee.

“The 15 rai was sold for 200 million baht. On the SorKor 1, the northern boundary of the plot was next to a field, but in reality it is next to a large hill,” he said.

That irregularity prompted further investigation to check all the boundaries of the plot and compare them with the SorKor 1. “None of the property boundaries in reality matched the description on the SorKor 1,” Col Dusadee said.

“The land is worth 200 million baht. If a resort were built there, it would be worth a billion baht,” said Col Dusadee.

Any upgrading of titles must have been approved by the Kathu District Chief, an official of the Kathu Land Office and an officer at the Department of Forestry Phuket Office at the time, he explained.

“We are still investigating the people involved,” he said. “If we find that any of these officials have been involved in illegally issuing land titles, we will press criminal charges against them.”

Of particular interest to the investigators were Chanote titles issued for 45 rai in a “Class C” protected forest in the Kamala Hills, near the Kathu Waterfall.

Two Chanote titles covering a total of 15 rai were issued in the name of a former deputy governor of Phuket, said Col Dusadee.

However, he did not elaborate in which year these deeds were issued or identify which “former deputy governor” took possession.

Another case of particular interest involved a daughter of a former permanent secretary of the Ministry of Interior who applied for Chanote titles for 18 plots covering a total of 200 rai in the same protected forest.

“A resort is currently being built on the site. At the entrance to the site, there is a sign saying [in Thai] ‘Phuket Vice Governor Residence’,” he said.

The illegal issuance of land titles has been rife in Phang Nga as well as Phuket, Col Dusadee said.

Land leased to foreigners by Thais who had no legal right to it was a growing problem fueled by spiraling property prices, he added.

Despite the severity of the charges, Permanent Secretary Chote Trachu made no mention to the press of what action his ministry would take in reclaiming the encroached land.