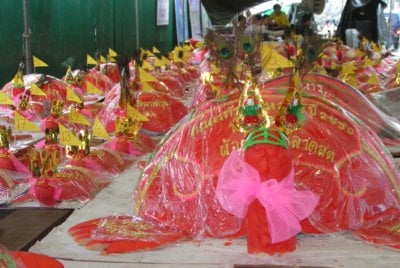 PHUKET CITY: The incessant rain today did not stop Phuket City’s ethnic Chinese from turning out en masse to pay their respects to the dead on the first day of the annual “Por Tor” festival.

The festival, officially opened by Phuket Governor Niran Kalayanamit at 1 pm, saw hundreds lighting joss sticks and offering cakes in the shapes of turtles, the Chinese symbol of longevity, from 10 am to 6 pm.

Stalls selling food, snacks and handicrafts have been set up along the road, many with turtle cakes on display. The turtle cakes are not for sale, though many are given away as a way to make merit.

A large screen has been set up to show movies tomorrow evening. Although the movies are being shown to honor the dead, the living are invited to come and enjoy them too.

The festival is being held between Suriyadej Circle and Jui Tui Shrine on Ranong Rd, which is closed to traffic until Friday.

The festival will conclude on Friday with a ceremony at Bang Niow Shrine on Phuket Rd, just south of Ong Sim Phai Rd.

Wanted for TV: Property reports from Brits and Thais