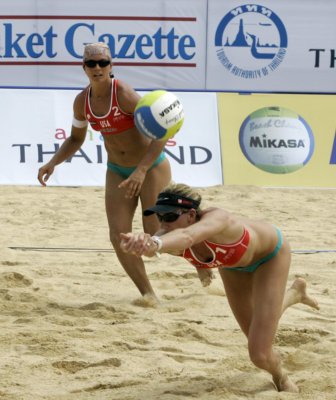 KARON: Number-one seeds Misty May-Treanor and Kerri Walsh from the US almost suffered a shock defeat at the hands of number 32 seeds Galyna Osheyko and Svitlana Baburina from the Ukraine, but recovered to make the semi-finals of the Swatch FIVB Beach Volley World Tour 2007 being played on Karon Beach.

Yesterday was the second day of play of the tourney. After the qualifying rounds held on Wednesday, the main competition kicked off with the big guns in the tournament taking to the sands for the first time.

Winners last year Xue Chen and Zhang Xi from China suffered an injury yesterday and were forced to forfeit their match against Efthalia Koutroumanidou and Maria Tsiartsiani from Greece.

The two Thai teams had mixed fortunes yesterday. Kamoltip Kulna and Yupa Puklongploy were defeated 2-0 in the first round by Eva Hamzaoui and Deborah Giaoui from France (19-21, 23-21, 15-12).

In play today, however, the Thai duo were defeated by Germans Katrin Holtwick and Ilka Semmler, who eventually bowed out to Austrians Doris and Stefanie Schwaiger.

The semi-finals will take place tomorrow, starting at 4 pm, with Treanor and Walsh still hot favorites to win the title, closely followed by second-seeded Tian Jia and Wang Jie from China, who defeated Banck and Gunther in straight sets late yesterday before destroying Rieke Brink-Abeler and Hella Jurich from Germany in straight sets (21-13, 21-13).

The last two semi-final places will be decided tomorrow.

The final will be held on Sunday.