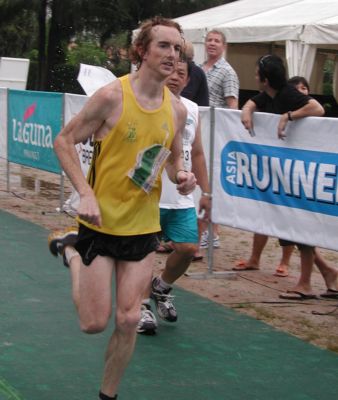 Phuket resident and Hash House Harrier “Fast” Eddy Ou, originally from the US, was second across the finish line, completing the 42-kilometer course in 3:11:10, followed by Seppo Rosnell from Finland, who finished third with a time of 3:15:37.

The races started early morning with the marathon runners leaving the start line at Laguna Phuket at 5am. The Half Marathon started at 6am, followed by the Fun Run at 6:30am and the Walk at 6:55am. The Kids’ Run started at 9am.

The Walk, introduced to the event this year, saw a large turnout of teams from local businesses and organizations, many of which wore team colors and had pledged to raise money for charity. There were also many individual entries, bringing the total number of participants in the Walk to 500.

Charlie, a former professional 800m runner, competed in the Half Marathon, then led youngsters on the 1km run. After crossing the finish line with the race winner, Charlie stayed at the line to cheer on youngsters over the final few meters.

Andy Penders and Hajime Nishi took a more leisurely approach to the races, with Andy joining the Walk and Hajime staying true to his eco-marathon philosophy by taking time to enjoy the beautiful scenery and chat with crowds along the course.

Click here for complete race results, and here for our PGTV report.