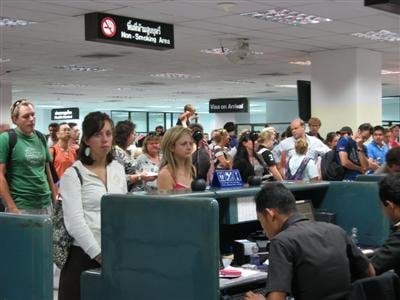 MAI KHAO, PHUKET: A young Australian couple accused of stealing three bottles of perfume from a duty-free shop at Phuket Airport have been released on bail, but must remain in Phuket while their court cases are heard.

Police identified the couple as 21-year-old Nathan Robert Hinds and his 16-year-old fiancée, whose name cannot be reported because she is a minor.

The couple were arrested by Tah Chat Chai Police on November 28 for allegedly shoplifting three bottles of perfume from the King Power duty-free shop in the departure lounge of Phuket International Airport.

The couple were awaiting their return flight to Australia after a 10-day holiday in Phuket when the alleged theft occurred. Their plans changed abruptly when the pair were arrested with the perfume, valued at 22,000 baht.

The cases of Mr Hinds and his betrothed will be forwarded to the Criminal and Juvenile Courts respectively, Tah Chat Chai Police say.

A source at Phuket Provincial Court said Mr Hinds was released on 100,000 baht bail the following day. He will have his first court hearing this Friday.

How long the minor will have to stay in Phuket will be up to the Juvenile Court, which has yet to receive the case file from police, Ms Sukhaporn said.

King Power also has to be contacted to see whether they want to press charges, she said.

“It will be up to the prosecutors whether or not to press charges. I can’t tell how long they will be in Phuket, but normally cases involving foreigners don’t take too long,” Ms Sukhaporn said.

Tha Chat Chai Police duty officer Lt Col Sarit Bodnongsang said the couple are accused of conspiring to steal the perfume by slipping the bottles into each others’ bags.

Because the alleged crime took place at night, they will face more serious penalties than for daylight shoplifting if convicted.

Both deny the charges, he said.

Their passports have been seized, Immigration has been informed and the pair will not be allowed to leave the province, he said.

With more than a week having passed since their arrest, it appears the case is not off to a swift start through the Thai criminal justice system, however.

Tha Chat Chai Police duty officer Sarit Bodnongsand told the Gazette today the case would stay with the police for the full two weeks allowable before it is forwarded to the courts.

Thus far the plight of the Aussie couple has failed to generate the kind of media attention back home as that of confessed beer mat thief Annice Smoel, a mother of four who walked out of the popular Aussie Bar in Patong with a beer mat in May this year.

After spending two nights in jail, Ms Smoel’s plight caused a media sensation in Australia and around the world after it was reported that she would face a long period of separation from her children over what she claimed was an innocent ‘prank’.

After the case hit the Australian and international media, Ms Smoel was subsequently released when she confessed to one charge of theft and was allowed to leave Thailand – about a month after her arrest.

Her fine of 1,000 baht was paid by Phuket Governor Wichai Phraisa-ngop.

The case of Mr Hinds is also notable in that it involves a King Power duty-free shop.

There have been several allegations of a scam operating out of King Power shops at Suvarnabhumi Airport in Bangkok. In what also became worldwide news reports, the shoppers, all tourists, were accused of shoplifting, then forced to ‘negotiate’ a settlement in order to catch their departing flights.

The British Embassy has warned its nationals transiting though Bangkok Airport not to move items around in the duty-free shops prior to paying for them as this could result in arrest and imprisonment, the BBC reported in July.

Thus far, no allegations of such scams at duty-free shops at Phuket Airport have been reported.