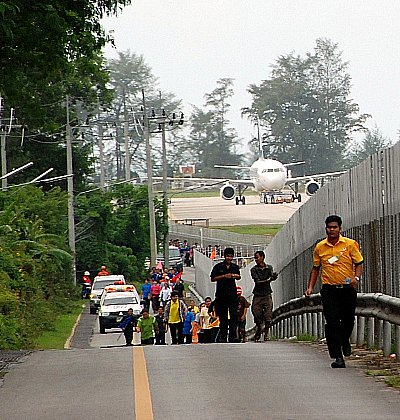 PHUKET: Following the evacuation of Phuket International Airport after the 8.6-Richter earthquake on April 11, several airlines on Friday expressed their confidence in how officials handle the emergency exercise.

At a press conference at the airport chaired by Airport Director Prathuang Sornkham, Thai Airways representative Jittrapong Narongwanich said all airlines that use Phuket Airport remain confident in the evacuation procedures following the April 11 evacuation.

Thanaporn Taebunpakul, representing the Association of European Airlines in Phuket, also confirmed that no scheduled flights from Europe had been canceled since the April 11 tsunami scare.

Member airlines have done a good job in maintaining tourist confidence in Phuket by assuring travellers that effective evacuation measures were in place in case of an emergency, she said.

Also attending the press conference were representatives from several of the 41 airlines that operate at the airport, as well as the management at airport flight control center, run by Aeronautical Radio of Thailand Limited (Aerothai).

Airport Director Prathuang told the press that about 1,500 passengers were evacuated to the designated evacuation zone at the Phuket Air Catering facility, located 1,400 meters from the main terminal.

The evacuation took about 45 minutes, he said.

“No one was injured and all their belongings were safe. Our work impressed the passengers a great deal,” said Mr Prathuang.

The Phuket Air Catering facility sits 20 meters above sea level and is considerably higher than the airfield.

The evacuation was not without problems, however. The breakdown in mobile phone networks was identified as the single biggest obstacle, as officials were able to relay information only by two-way radio.

The evacuation order set in motion an automatic three-hour closure of the airport, causing a traffic jam at the entrance as vehicles were not allowed entry. There was confusion among many arriving passengers who were unaware of the earthquake, the tsunami evacuation issued or the airport’s subsequent closure, Mr Prathuang said.

Mr Prathuang cited training as the reason the evacuation was an overall success.

“We hold an evacuation drill every year, which was why everything went smoothly on April 11. Every airline is confident in our evacuation procedures and no scheduled flights have been canceled. Actually, passenger traffic is up 10 per cent over the same period last year and the number of flights is up three per cent,” he said.

The evacuation protocol calls for all planes capable of taking off do so as soon as possible after a tsunami warning is issued. This is because the airfield is designated as within a tsunami-risk zone. The west end of the airfield was covered with debris after the 2004 tsunami disaster, but was not inundated by the waves.

Also, during an evacuation all inbound flight are diverted to other airports in the region until the warning is rescinded and the situation returns to normal. Many of the aircraft are re-routed to Krabi Airport or Surat Thani Airport, while others are ordered to land at Suvarnabhumi Airport in Bangkok, Mr Prathuang explained.

He added that the main terminal at Phuket Airport was built 30 years ago under a design that would allow it withstand damage in the event of an earthquake of up to 5.0 magnitude centered under the airfield.