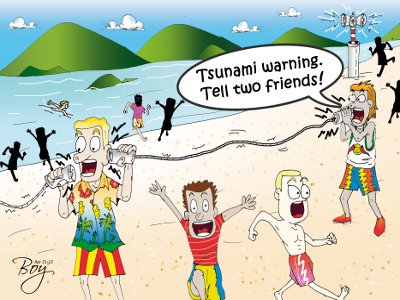 PHUKET: THE pair of powerful earthquakes that struck off the coast of Sumatra on April 11 served as the perfect ‘live test’ of Thailand’s preparedness to conduct emergency evacuation of tsunami risk areas, exposing, once again, serious shortcomings in the government’s ability to relay important information to the public in a timely fashion.

The 8.6-magnitude quake that hit at 3:38pm was felt across the region, causing many people to panic, evacuate buildings and get on the telephone to warn loved ones in risk areas to get to the safety of higher ground because a tsunami might be on its way.

Unfortunately, the huge increase in telephone traffic quickly resulted in almost immediate regional collapse of service by all mobile phone providers, leaving users with an eerie sense of déjà vu. The last time such an across-the-board loss of service struck was in the aftermath of the 2004 disaster.

Meanwhile, efforts by the National Disaster Warning Center (NDWC) to get out real time information and keep the public updated as events unfolded were compromised on many fronts.

After initial reports about the earthquake were aired through terrestrial television, broadcasting across all of these channels was then automatically switched over to “TV Pool” coverage of a state event that continued until 7pm, immediately after which it declared the situation in Thailand as “back to normal”.

This was not the first time the rigid workings of the “TV Pool” have been exposed, in some cases comically. Back in 1991, in the hours following the ouster by coup d’état of democratically-elected Thai premier Chatichai Choonhaven, all five state TV channels at the time displayed an image of the Thai flag as military music played in the background.

From time to time, the music would stop and one of the coup makers would appear to read aloud from a developing list of reasons explaining why the coup had to take place. However, one of these episodes happened to come at precisely 6pm, at which time the announcer was cut off in mid-syllable by the Thai National Anthem played nightly as part of Thailand’s evening “time check”.

Apparently not much has changed since then. As pointed out by former premier Abhisit Vejjajiva, the events of April 11 revealed the need to review the way the “TV Pool” system operates, especially in times when public safety is at risk.

Soon after the first quake, the NDWC website also failed, though the agency did provide some information through its Facebook page. Its “SMS Alert” system failed as well, due to the lack of mobile phone services, the Gazette receiving its warning at 6:35pm, almost two full hours after the first quake.

Fortunately, the NDWC’s network of 69 warning towers got a passing grade, even though it covers only a small part of Thailand’s Andaman coastline that is at risk of tsunami inundation.

Phuket Opinion: Take off the gloves