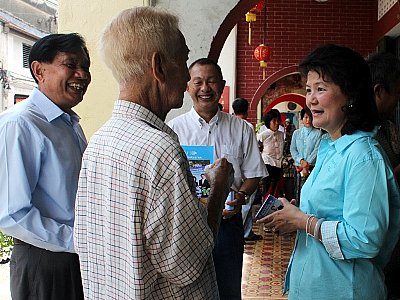 The news came today as longstanding Phuket Democrat Anchalee Vanich Thepabutr confirmed she will be the Democrat Party candidate contesting the Phuket 1 constituency in the July 3 general election.

Mrs Anchalee this morning spent an hour visiting residents on Thalang Road in Old Phuket Town, chatting with elderly folk who have lived in the neighborhood for many years, while handing out leaflets calling on people to vote for the Democrat Party in the Party List MP election.

From 2004 to 2008, she was president of the Phuket Provincial Administrative Organization (OrBorJor).

After losing the OrBorJor presidency to Paiboon Upatising in 2008, Mrs Anchalee was selected to be Deputy Secretary-General to the Prime Minister.

On January 2 this year she was promoted to Secretary-General to the Prime Minister, a position she held until Parliament was dissolved on May 10.

“I was chosen to contest the Phuket 1 constituency because I have a long history – about 20 years – of representing and working for the people of Phuket,” Mrs Anchalee said.