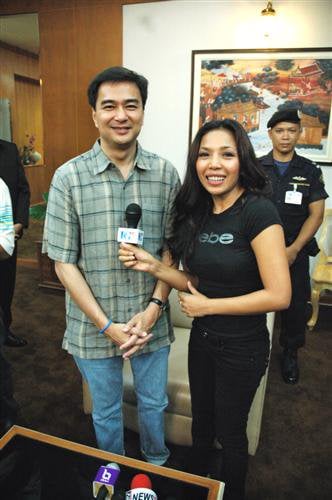 MAI KHAO, PHUKET: Prime Minister Abhisit Vejjajiva has confirmed the government intends to invoke the Internal Security Act during the Asean summits scheduled to be held at the Hilton Phuket Arcadia Resort in mid-June.

The announcement came at a press conference at Phuket International Airport last night.

PM Abhisit was on his way back to the capital following a secret vacation in Phuket. He and his family stayed at the Sri Panwa villa resort in tambon Wichit for two nights from Friday.

PM Abhisit, looking refreshed and relaxed last night, expressed confidence it would be “third time lucky” with Phuket as the host.

The government is going full steam ahead in preparing security for the event, he added.

“We already sent Deputy Prime Minister Suthep Thaugsuban to Phuket on May 2 to explain to local leaders the importance of these meetings for Thailand to regain the trust of the international community,” he said.

Mr Suthep, the Cabinet member in charge of national security issues, has had first-hand experience of the dangers the red-shirts could present.

He and PM Abhisit were riding in the same car when it was attacked by red-shirted protesters outside the Interior Ministry in one of the many violent episodes that marred this year’s Songkran celebrations.

PM Abhisit told reporters last night that he believed the people of Phuket would throw their full support behind the regional gathering – a feeling shared by people across the country.

Invoking the Internal Security Act is at the request of officers in charge of national security issues, PM Abhisit said.

General Anupong Paochinda, the commander-in-chief of the Royal Thai Army, said last Friday that local police alone might not be enough to ensure adequate security.

“This Act will help government mobilize the other state agencies to ensure the meetings go smoothly,” PM Abhisit said.

The Act will empower those agencies with added control over roads, communications and other areas vital to security during the event.

“The government will send a draft of the security act to Parliament, which is expected to pass a resolution on the issue by the end of the month. We will then issue a formal announcement as to why the measures are necessary,” he said.

“Tourism has been impacted by past riots. If we host these meetings successfully, it will enhance the image of Phuket and Thailand in general as a safe place to visit,” he added.

Some Asean leaders have already confirmed their attendance while others were still considering scheduling and other issues that might influence whether or not they can attend, he said.

The government would use the lessons learned in Pattaya in planning better security for delegates this time around, he said.

“I trust that the people of Phuket – and all Thai people – don’t want a repeat of the last time,” he said.