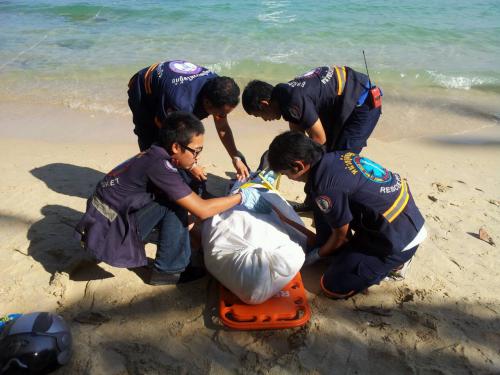 PHUKET: The engine of the ultralight flying boat that crashed in the sea near Rawai on Wednesday, killing its pilot, did not explode, says an expat who took part in the recovery effort.

“There were no signs of explosive damage to the engine,” Singaporean Marshall Ong told the Phuket Gazette.

Mr Ong saw the engine when he entered the water to turn it off. It was leaking fuel, he said, and he and others sought to prevent accidental ignition.

“There was no damage to the engine block to suggest an explosion,” Mr Ong wrote in an email, adding that there was no evidence of a fire, which would have been likely had it exploded.

The propeller was broken, he said. “[It] may have broken on impact… hence the loud sound.”

Early witness reports said that the aircraft, piloted by 64-year-old German Georg Erwin Bach, either plummeted or landed on the sea unexpectedly, suggesting a problem with the engine.

Witnesses said the pilot then took off again before an “explosion” was heard and the craft crashed (story here).

Mr Ong suggested that the takeoff from the sea may not have been an actual takeoff, but simply the boat bouncing back into the air after it struck the water.

“It’s not clear he was in control taking off. The guy may have had a heart attack while airborne,” he suggested, offering an alternative to police speculation that Mr Bach drowned after the crash (story here).