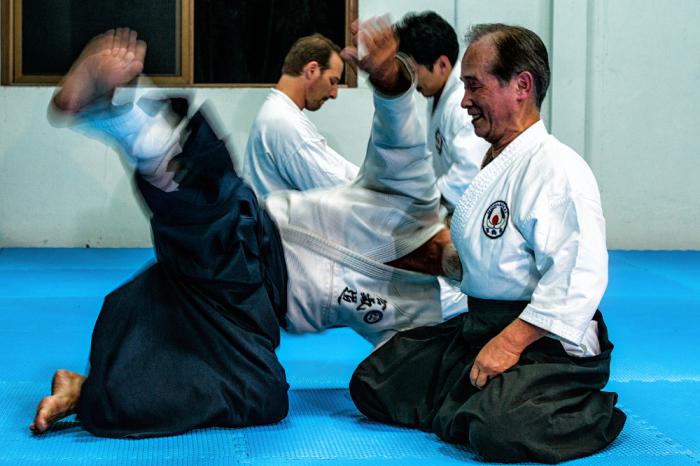 PHUKET: Making a guest appearance at the Aikido of Phuket dojo across from Bangkok Hospital, Aikido Grand Master Nobuo Maekawa exceeded my per-conceived expectations of the quintessential Japanese martial artist. Small in stature but huge in confidence, aging but incredibly able and agile, lighthearted yet deeply philosophical and reflective.

“It is a moving meditation. Blend, like cafe au lait. If the coffee [is] too late, milk too fast, not a good taste – same time, together. It’s a middle point.” said the 65-year-old Sensei Maekawa while gesticulating with fiery enthusiasm. Maekawa has been studying Aikido since the early 60s when it was first being popularized as a distinct form of martial arts.

After organizing an Aikido club at his high school and another when he attended Tottori University, Maekawa began practicing karate in Okinawa and continued building on his skills by practicing various other martial arts.

From 1980 to 1997 Maekawa trained students in Aikido at Tottori University and in 1988 continued passing on his martial arts skills and philosophical teachings to students at Ryukyu University, where he continues to do so today.

As a major name in the world of Aikido, and having reached the 6th degree black belt, Maekawa finds himself travelling the world, accepting invitations to impart his knowledge and skills to those who share his passion.

The martial art of Aikido was developed following World War II out of the skills and styles of the samurai of feudal Japan. “Techniques are centered around harmonizing with your opponent. They are characterized by circular, natural, flowing movements,” says Aikido of Phuket’s website.

Aikido of Phuket co-founder Gerald Tuckwood compares it to the slower, more meditative martial art of tai chi. Although in practical use, Aikido movements to defend oneself are initiated quickly, it is practiced and trained at a slower pace.

Watching the students of Aikido of Phuket in their practice with Sensei Maekawa, it was apparent that there was a strong focus on manipulating pressure points on the arms, wrists and neck and controlling the momentum of incoming attacks to throw opponents. These throwing methods allude to judo and jujitsu influences.

Of equal, or even more importance than the physical methods used in Aikido, are the philosophical and spiritual doctrines adhered to by practitioners. Credited with being the original founder of Aikido, Morihei Ueshiba is also responsible for the ideologies associated with Aikido, such as the concept that it should be used in such a way as to avoid injuring attackers, and that instead of going against an opponent, defenders should harmonize with them.

While talking with the Gazette, Maekawa likened Aikido philosophies with those of Gestalt psychological theory which concerns perception and the, “essence or shape of an entity’s complete form.”

Maekawa and his disciples, such as Aikido of Phuket owners Gerald Tuckwood and David Bare, are carrying on the legacy of Morihei Ueshiba and continuing the traditions of Aikido.

“To smash, injure, or destroy is the worst thing a human being can do. The real ‘Way of a Warrior’ is to prevent such slaughter – it is the art of peace, the power of love.” – Morihei Ueshiba.

Phuket black water problem to be taken on by Bangkok officials