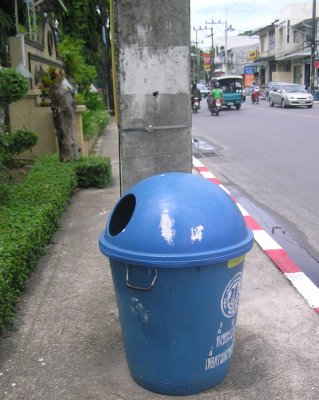 PHUKET CITY: The new garbage cans being distributed throughout the city have proven such a hit with the public that they keep disappearing.

Plastic, blue in color and about a meter high, the bins are of such heavy-duty construction that they can be rammed by a moving vehicle without cracking. Other special design features include high chemical resistance and a unique shape that prevents all but the cleverest of soi dogs from removing garbage from them.

The trouble is, they’re so good that people keep stealing them.

Phuket City Deputy Mayor Sornsiri Koopongsakorn, who has been tasked with ensuring that the receptacles stay in the public domain, said the municipality first noted the problem not long after the bins were first put on city streets.

Some 500 of the bins were placed throughout the city in locations that did not already have the larger, standard-issue green or yellow garbage containers.

“With such special features, we expected people would try to steal the new bins to use for storing water, or for collecting things, or even to sell as scrap,” she told the Gazette.

“The new bins are definitely more popular with thieves than the old models.”

The Municipality wasn’t able to say just how many of the new containers have been purloined.

But it’s a large enough figure to have prompted the city to take a hard line. K. Sornsiri said that the municipality was prepared to prosecute to the full extent of the law anyone caught copping one.