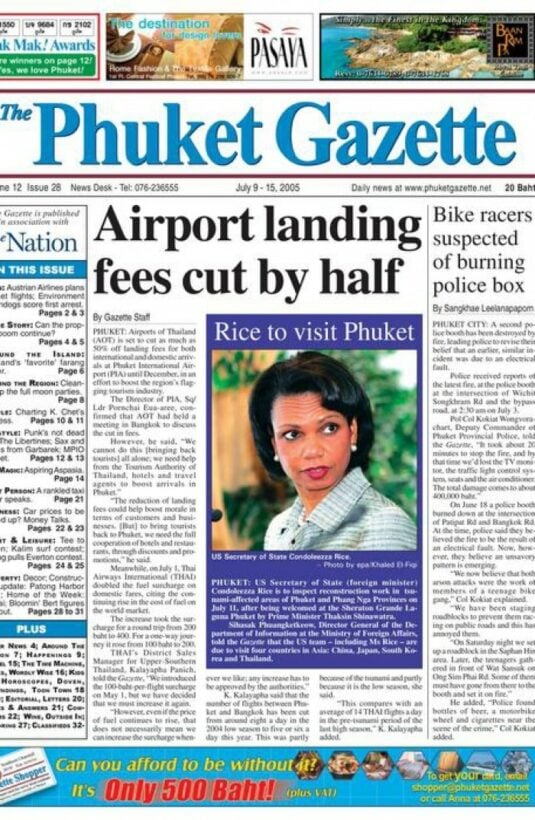 PHUKET: Much like 2015, the island was battling a flagging tourism industry and scrambling for solutions in 2005. Though Airports of Thailand (AoT) said it couldn’t bring tourists back ‘alone’, it was looking to slash landing fees for both domestic and international flights to woo crowds to the island – little did they know that the time would come… and so would the Chinese and Russians.

Was the fear of a crashing tourism sector well founded, and the solutions conceived 10 years ago to our tourism-dilemma, what ushered in the mass tourism trade mentality to the island? Who knows, but without a doubt, when there is a drought, a farmer sheds his tears for rain with no concerns about the quantity. Now, in 2015, despite concerns, the number of arrivals has led to a rift in the tourism industry between those desperately reliant on the mass-tourism source markets and those chasing Free Independent Travellers (FITs).

Tourism bouts aside, the July 11-17 issue of the Phuket Gazette is packed with more ‘good airline news’ as Australian Airlines announced plans for Phuket flights and Taiwan cancelled its travel advisory.

In other sections of the paper, the wheels of the bus go round and round – and apparently so does the tragedy that is often referred to as Phuket’s public transport. A decade ago, the Gazette was faced with the simple question that people haven’t yet stopped asking – what public transport can I get from the airport? Okay, this reader was a bit more savvy: Can I take a songtaew from the airport to Phuket City?

In the current issue of the Gazette, as we are neck deep in the age of technology – though songtaews are no relic of the past – Governor Nisit Jansomwong is pushing for taxi drivers to saddle up and use the smartphone application GrabTaxi for safe, easy and reliable transportation on the island.

If only expats and tourists could change their mentality and sort out the songtaew system, maybe we wouldn’t need to be hounding on and on about public transport for another 10 years… then again, perhaps by then the light rail will have arrived.