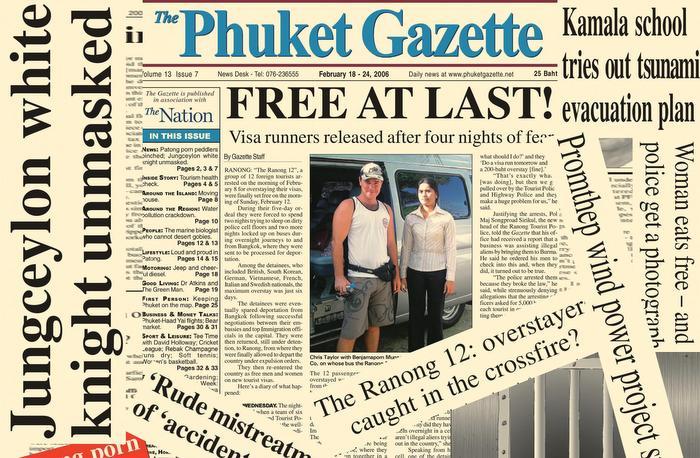 PHUKET: Phuket is changing at exponential speed. The transformation from what this little island looked like ten years ago, to the traffic-congested mayhem we now see on our roads, is dramatic to say the least. But some things never change, or at least they don’t change for long.

‘Visa runners released after four nights of fear’ reads the sub-headline on page one of the February 18-24, 2006 issue of the Phuket Gazette. Thankfully, the extreme measure of jailing and preparing to deport a tourist for somewhere between one and six days of overstay doesn’t seem to be a real possibility anymore, but then again, would you be surprised? Outraged, of course, but surprised?

Quickly coming to be known as the ‘Ranong 12’, a group of 12 foreign tourists were arrested for overstaying their visas. One of them had received advice that many a regular tourist and expat has heard before: do a visa run tomorrow and pay the fine.

The fine back then was just 200 baht a day. It has since been raised to 500 baht a day. Things have also become a bit more strict; blurred rules about overstay blacklists, tourist visa limitations and permit to stay limitations often lead to on-the-ground rulings made by officers who may or may not be swayed by some tea money.

Allegations of bribes being part of the visa run industry also remain. Today, it’s not uncommon to hear those returning to Thailand via the Sadao border-crossing grumbling about having to slip 200 baht into their passports as they go through, in order to avoid being hauled over the coals – despite having valid visas and paperwork. Given that doing so implicates the person in the crime and that filming at the crossing is illegal, proving such allegations is tough. For the Ranong 12 though, things were a bit worse than grumbling over 200 baht. Already behind bars and sleeping on grubby jail-cell floors, they were much more vulnerable.

Maj Songproad Sirikul, then-head of the Ranong Tourist Police, ‘strenuously denied allegations that the arresting officers asked for 5,000 baht from each tourist in exchange for letting them go’, reported the Gazette.

“I think that’s impossible. I can guarantee that Tourist Police officers did not ask for money, because we are not in trouble [financially] and I constantly remind them not to do that,” said Maj Songproad.

After five days, which included being locked in two mini-buses for the overnight journey to the Immigration Detention Center in Bangkok, and then being brought back to Ranong, the dozen foreigners were ‘deported’ to Burma. All 12 promptly returned to Thailand via Ranong Immigration, where they were issued new visas.

So, like unknown numbers of tourists before them, and after them, the Ranong 12 were swept back up in the ever-turning, never-changing wheel of immigration corruption allegations, wavering visa-law enforcement and on-the-ground judgments that fail to provide precedence for tomorrow, let alone ten years from now.