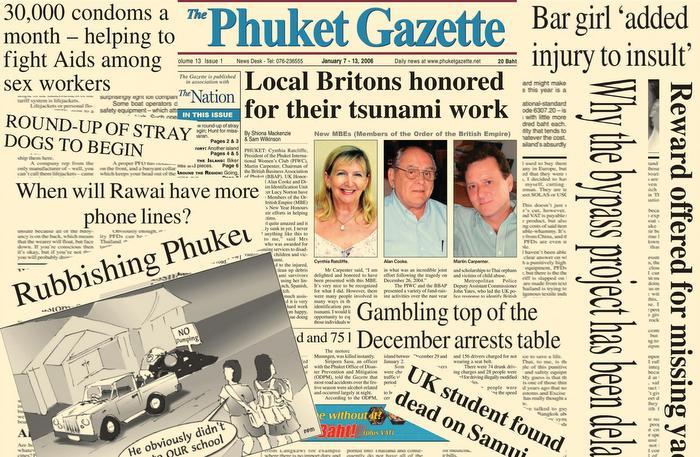 PHUKET: Ten years ago, the United Kingdom honored four British nationals in Phuket for their efforts in helping tsunami victims, by making them Members of the Order of the British Empire. They were Cynthia Ratcliffe, then president of the Phuket International Women’s Club; Martin Carpenter, chairman of the British Business Association of Phuket; Alan Cooke, the British honorary consul to Phuket; and Lucy Norton, the press officer for the Disaster Victim Identification Unit. And, though it was yet another positive page one story from the Phuket Gazette at a time in the island’s history when focusing on the good was so necessary, right below the lead on page one was a beast that continues to destroy lives and families on our island even today: Phuket’s roads.

Though it hadn’t been dubbed the ‘Seven Days of Danger’ yet, a five-day road-safety campaign over the holidays had concluded on the island with one death, a number that pales in comparison to the seven deaths during this year’s road-safety campaign. Before bemoaning the increased fatality rate, let’s take a breath and remember how the registered and unregistered population on the island has boomed in the last 10 years. And, given that no adequate public transportation has been put in place, this means there has also been a boom in vehicles adding to the chaos on the roads. In fact, the number of fatalities – by population – have decreased significantly over the last seven years.

The meat of the issue, however, was the ‘Phuket People’ pages of the 2005, January 7-13 issue, which penetrates beyond any vague euphemisms about prostitutes – referring to them as ‘bar girls’, for instance – and disregards any taboos on talking about the sex industry and HIV-positive people on the island.

Nestled into a story that calls a spade a spade, Eam-Om Kittitornkul, the Phuket Provincial Health Office AIDS section chief, reveals facts that were troubling as well as amusing in the bluntness with which they are stated, as she deals with a ‘second wave’ of HIV on the island, after infection levels dropped between 1998 and 2000.

“The first wave was caused by prostitution, but the latest wave is prevalent among teenagers,” Ms Eam-Om told the Gazette.

“If sex workers come in with STDs [sexually-transmitted diseases] it means that they cannot work, so they suffer a loss of income. You have to understand that some nights they can have four to five customers and it means a significant loss of earnings if they cannot work.”

The increase in the number of HIV-positive people in Phuket 10 years ago had more to do with changes in society.

“The reason more women have HIV than ever before is that Thai society has changed over the years. Women have started to have more than one boyfriend. Married women sometimes enjoy a ‘toy boy’ or take a lover. Sometimes they don’t care about the danger – they just want to have an extra man. And if that man has a relationship with another woman, the spread of infection is set up. This is how people put themselves more at risk of getting HIV,” Ms Eam-Om told the Gazette.

“Teenagers tell me that the reason they don’t want to use condoms is that it doesn’t feel natural and that they’d rather feel trust than rubber between each other.”

Clearly, much of that trust was misplaced…

Nonetheless, 10 years later, efforts by the PPHO and other organizations on the island continue to promote safe sex by giving away condoms. In 2005, the PPHO was giving away 30,000 condoms a month. Now, they give away more than 100,000 a year. In addition to this, just in November last year, the Phuket Loves You Club (PLU) worked with students from Prince of Songkhla University to distribute 20,000 of 100,000 rubbers donated by Carex.

Though there have been significant improvements over the last decade in tackling road-safety and safe-sex issues, we still have a long, hard road ahead of us in order to create a safer Phuket.