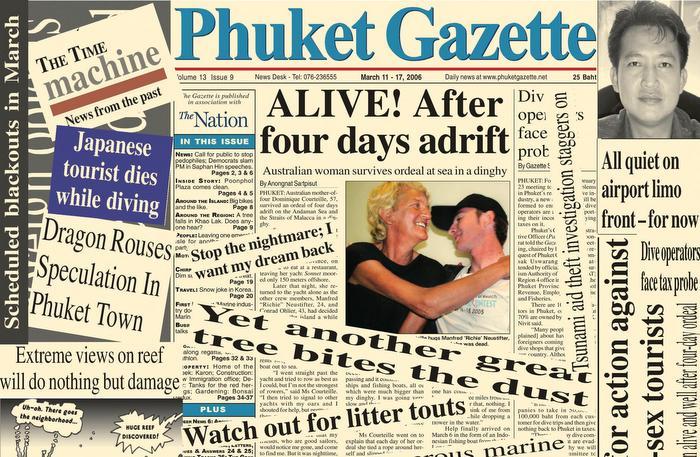 PHUKET: Unless bald or in the military, most people have changed their haircuts over the span of a decade. But not ‘Phuket’s Jet-ski Champion’, former local Marine Office Chief Phuripat Theerakulpisut. However, he did change his name. In the March 11-17, 2006 issue of the Phuket Gazette, Mr Phuripat was still using the name Surin Theerapkulpisut as he questioned whether or not it was good for Thais and Thailand to allow people with foreign captains’ licenses to skipper Thai-registered sailboats under 16 meters.

“The government has done enough to support foreigners in the marine industry. Taxes on yachts have been cut to zero per cent. Maybe the government believes that the marine industry boosts employment or enhances economic growth. I doubt that it does,” Mr Phuripat (‘Surin’) said, long before he stepped aboard the superyacht chartering licence bandwagon. “I don’t hate foreigners and I am not against a free and open economy. Nor do I oppose commerce, but the Thai government ought to prioritize what is of real benefit to Thai people.”

Mr Phuripat was transferred out of Phuket to the Marine Office in landlocked Nonthaburi Province late last month. Whether or not this will change the direction of the Phuket Marine Office, which is also in charge of regulations for the island’s jet-skis, is still unclear, as a new chief has yet to take up the mantle.

Not surprisingly, Mr Surin’s haircut was not page-one quality news back in 2006, and though it is a classy look, it still hasn’t made the cut. Taking the front page of the Gazette in the March 11-17, 2006 issue was the survival of an Australian woman who was adrift at sea in a dingy for four days.

Dominique Coourteille, 57, was heading back on her yacht when her dinghy ran out of fuel. A combination of high winds and abnormally-strong currents swept the boat out to sea. Her fellow sailors were still on shore, leaving no one to call to as the current pushed her past the yacht. She wasn’t strong enough to paddle to safety.

Contemplating death, Ms Courteille wrote on the dinghy’s sides, “I did not commit suicide! It was an accident with the engine that sent me off into the blue. I am very sad to die because I would have loved to see you live. I’m astonished that no one has come looking for me, because I’m three miles from the island and, after that, nothing. I love you all. Think of me from time to time while dropping flowers in the water.”

Ms Courteille’s survival of such an ordeal – alone in just a dingy without provisions or shelter from the sun – is incredible. Though less incredible, but staggeringly coincidental, four foreigners, who were adrift in their sailing yacht for five days last month, were rescued – almost 10 years later, on the dot.

The Canadian and British sailors were aboard the Malaysian-flagged yacht Kiss when the engine stopped working. Shortly thereafter, the lead mast on the boat cracked, followed by the sail ripping after it was hoisted up a secondary mast. Such a series of mishaps is significantly worse luck than having your dingy simply running out of fuel. However, at least they were together and had provisions and shelter.

Jumping into the Phuket ‘Time Machine’, we dive even further into the history books of the island, finding ourselves in a time when dragons still romped across the tropical paradise.

Patana Saelim brought a reporter from the Siang Tai Daily to witness evidence of the footprint that a dragon left on the roof of a friend’s pickup truck, reported the Gazette. The abbot of Wat Naka, Pra Boonsri, when consulted about the mythical appearance, refused to rule out a dragon. The man with the dragon-footprint truck vowed to not wash the vehicle until all traces of the dragon’s presence were gone from it naturally.

Now, 10 years later, it is safe to assume that the man has gotten around to washing his truck, just as the man formally known as Mr Surin has finally been swept away from our shores.